Lead is a toxic metal that occurs naturally in the Earth’s crust, but its use in activities such as mining, smelting and the burning of fossil fuels has contaminated the environment, leading to human exposure and public health problems in various parts of the world. Lead is also a key component in paint, pigments, gasoline, ammunition, batteries, stained glass, solder, roofing materials and some cosmetics and medicines.

Lead poisoning refers to when lead accumulates in the body and causes severe health problems. The accumulating lead is distributed to and stored in the brain, kidneys, liver, bones and teeth. Even very small amounts can lead to problems and at very high amounts, it can cause death. Lead exposure is determined by measuring the amount of lead in the blood and no known level of lead exposure is regarded as safe.

Children under 6 years of age are particularly vulnerable to the toxic effects of lead poisoning, which causes profound and permanent problems, particularly ones that affect brain development and the nervous system. Children of this age are particularly vulnerable to lead poisoning because they absorb up to five times more lead when exposed than adults do. Hand-to-mouth behaviors among this age group also increase the risk of objects containing or coated in lead being swallowed. In adults, lead poisoning can also lead to long-term health issues, including hypertension and kidney damage.

During pregnancy, lead is released from bone into the blood, which is a source of exposure to the fetus. Pregnant woman who are exposed to high lead levels are at an increased risk of miscarriage, stillbirth and premature birth.

The use of lead paints in homes or in the manufacture of children’s toys or home furniture has not been allowed in the US since 1978. However, the lead paint that is still found in the walls and wood of old buildings is a source of exposure. In children, lead poisoning mainly occurs as a result of eating chips of paint that contain lead. 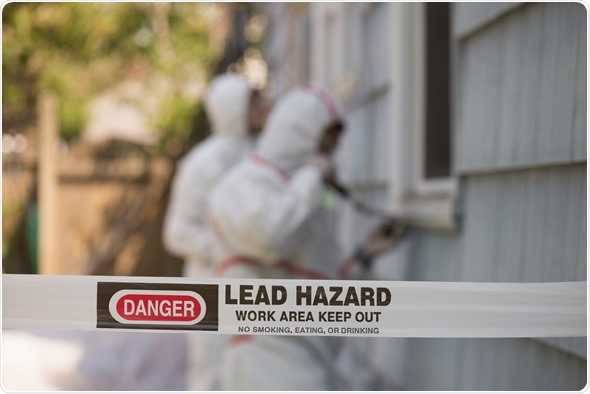