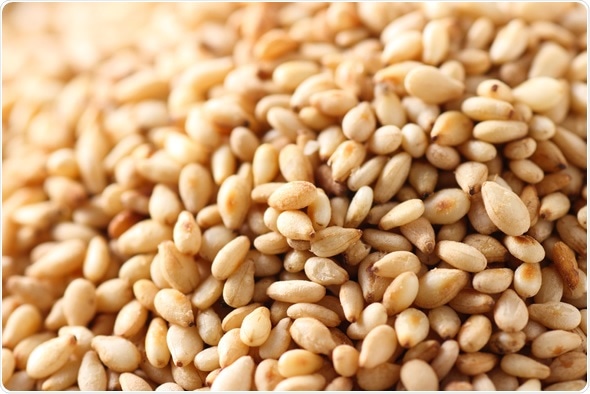 The sesame seed is a very potent allergen, causing symptoms such as pruritus, generalized erythema, angioedema of the uvula, a steep drop in blood pressure, and asthma.

However, these severe reactions are usually preceded by milder ones known as shock fragments, with symptoms of edema, rhinitis, and conjunctivitis. If these early symptoms are diagnosed and treated in a timely manner; anaphylaxis may be averted by the administration of the appropriate medication and avoiding the ingestion of the trigger, the sesame seed-containing food.

Sesame oil does not always produce the same kind of reaction as sesame seeds. The symptoms of sesame seed allergy start immediately after consumption. This type of allergy starts before the age of 2 years in several cases.  The child may ‘grow out’ of it in a small percentage of cases.

Sesame seed allergy is diagnosed based on the symptoms of the patient, followed by tests such as food-specific IgE levels and skin prick testing. A negative skin prick test is usually associated with lack of clinical symptoms. A food challenge may be dangerous in some patients.

Cross-reactivity may occur between peanut and sesame seed allergies. More than a quarter of children with peanut allergies also reacted to sesame seed, despite it being absent from their diet. This may occur because the seed storage proteins and oleosins are structurally similar in both. The antigens in sesame seed include; Sesi 1, Sesi 2, and Sesi 3 (storage proteins). The oleosins include Sesi 4 and Sesi 5, which are also found in hazelnuts and peanuts.

The first step in the management of sesame seed allergy is to avoid the consumption of sesame seeds in the diet. As sesame seeds may sometimes be referred to by other names, such as benne, benne seed or benniseed, gingelly seed, sesamol, sim-sim, or til, labels should be thoroughly checked for people with a known allergy.

It is also important for individuals to have an action plan so that they can take action if a severe allergic reaction does occur. This may include antihistamines or other anti-allergic medications. Assess to the allergy action plan and the appropriate medications should be available at all times, both at home and at school or work, in case of an emergency.