A movement disorder is a condition characterized by the occurrence of involuntary abnormalities in movement. It may be classified as hyperkinetic or hypokinetic, depending upon whether there is an increase or decrease in overall movement. Hyperkinetic disorders include tremor, dystonia, myoclonus, and chorea.

Alcohol is commonly used as a stimulant and a sedative, depending upon the dose ingested and the previous habits of the individual. It acts by depressing the central nervous system (CNS) via facilitation of the neurotransmitter gamma-aminobutyric acid (GABA). This tilts the balance between the excitatory chemical glutamate and the inhibitory molecule GABA, resulting in reduced excitability of the brain and spinal cord. 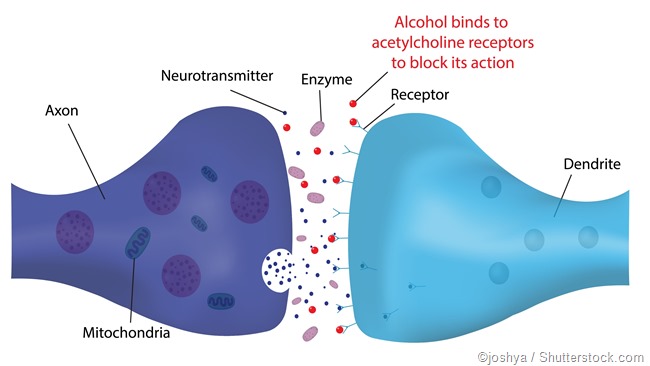 When ingested over a long term, alcohol reduces the number of GABA receptors by a process called down regulation. To overcome this, a larger dose of alcohol is then required to produce the earlier effects.

Alcohol also antagonizes N-methyl-D-aspartate (NMDA) at receptor level, thereby depressing CNS tone. Over a long duration of use, it then up regulates the number of NMDA receptors as well as increasing the amount of glutamate to compensate for greater inhibition.

The most frequent alcohol-associated tremor is postural. This is seen when a limb or body part is held against gravity (such as holding the arms outstretched). It is seen both in advanced dependence and early withdrawal.

Cerebellar signs set in following more prolonged exposure to alcohol. These include cerebellar ataxia, especially of the lower limbs. The vermis shows degenerative changes, extending through all three cortical layers.

When an individual with habitual alcohol ingestion suddenly stops alcohol use, the CNS experiences glutamate excitation without alcohol-induced inhibition, causing an imbalance in CNS homeostasis. This is responsible for the appearance of symptoms and signs identified with alcohol withdrawal, such as tachycardia, tremors, and even seizures or delirium tremens.

The tremors associated with acute alcohol withdrawal usually take the form of action tremors in the hands, but may involve other parts of the body. Other disturbances are also seen, and may include arousal of the autonomic system, delirium, and seizures. In this sense, the tremor which follows alcohol withdrawal is similar to the action or postural tremor which follows the use of beta agonists or lithium.

The tremor following alcohol abstinence resembles essential tremor (ET) but has a higher frequency, and, like it, responds well to treatment with the beta-blocker propranolol. It is almost always confined to the hands.

Tremor caused by alcohol withdrawal shares the common feature with other symptoms of reaching a peak by 10-30 hours, following which it slowly subsides in about 40-50 hours from the last dose.

Delirium tremens is the most severe form of alcohol withdrawal, and is also characterized by a coarse tremor and signs of heightened autonomic activity, often with hallucinations or delusions.

Finally, alcoholic liver disease which has advanced to hepatic encephalopathy show a flapping tremor of the hands called asterixis. This is the term used to describe a brief irregular interruption of a voluntary muscle action because of a short lapse in posture maintenance, and has a frequency of 3-5 Hz.

Thus both alcohol abuse and withdrawal can lead to tremor.

Benzodiazepines are the treatment of choice in addressing symptoms due to alcohol withdrawal. Long-acting drugs in this category are usually preferred, and the dose is tapered over the least possible duration, so as to prevent the development of drug dependence and to produce maximum benefit.