Natural killer (NK) cells are a type of lymphoid cell which function in the innate immune system to remove infected or cancerous self-cells.

The innate immune system is the first line of defence against infection. It is non-specific and less effective than the acquired immune system, however it can respond to an immunological threat much faster and hold off the threat until a specific response can be mounted. 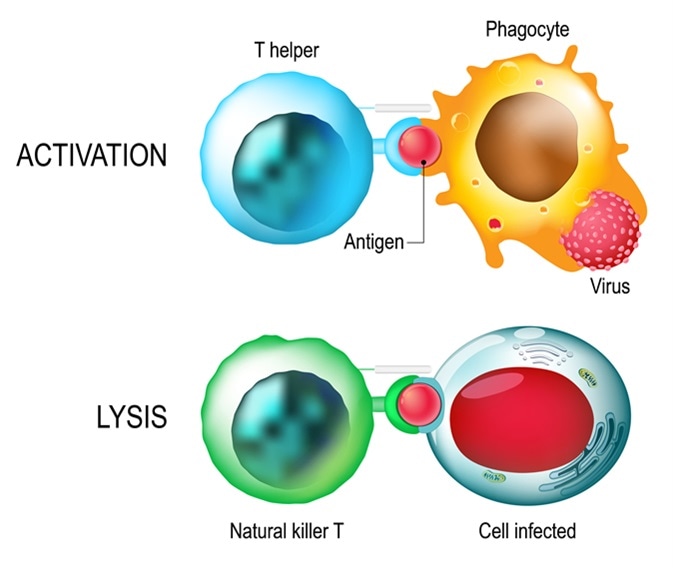 The Role of Natural Killer Cells in the Innate Immune System

Natural killer cells are initially developed within the primary lymphoid tissue of the bone marrow where they undergo positive and negative selection to remove self-targeting cells. Once they have matured, they move to secondary lymphoid tissues to undergo terminal maturation.

Mature NK cells possess both stimulatory and inhibitory receptors which control the activity of the cell, for example killer cell immunoglobulin like receptors (KIR) and NKG2D. Over 20 activating receptors are known that function to recognise proteins which are not usually present on the surface of a cell. Inhibitory receptors mainly recognise self MHC I proteins. This is because many types of virus have evolved immunological evasion strategies by downregulating the MHC class I, meaning that the immune system cannot detect their viral antigens.

Once NK cells are active they insert their lytic granules, which contain cytotoxic chemical, into the infected cell. An immunological synapse is formed between the NK cells and the infected cell before perforins and granzyme B are released. Perforins create pores in the membrane which allow death-inducing enzyme granzyme B to enter the cell and induce caspase mediated apoptosis, resulting in cell death. Activated NK cells also produce cytokines (IFN-γ and TNF-α) which recruit other members of the immune system and activate the acquired response.

The importance of NK cells is demonstrated in a rare immunodeficiency condition called natural killer cell deficiency. Individuals who suffer from this condition are highly susceptible to viral conditions as they lack NK cells, meaning infected self-cells cannot be detected and killed. This condition occurs in two different types: Classical NKD (CNKD) occurs when lymphocytes are not present in peripheral blood, whereas functional NKD occurs when lymphocytes are present but don’t function correctly.

Since NK cells selectively target cancerous or virally infected cells due to their reduced MHC class I levels, scientists have suggested harnessing their function to treat cancers cells. White blood cells are initially collected from the patient, activated and allowed to proliferate. They are then reintroduced into the body to target the cancerous cells.

Natural killer cells are vital for the function of the innate immune system, with absence having disastrous implications as demonstrated by NKD. These cells also represent an exciting possible treatment of cancer, which can target just the cancerous cells and could allow the immune system to kill tumours with minimal side effects.