What is the appendix?

The appendix is a vestigial organ left behind by human evolution. While the appendix has no specific function in the human digestive system, it is situated along the bottom right side of the large intestine. The little finger like projection is part of the bowel. There is no adverse reaction if it is missing or even if it is surgically removed. 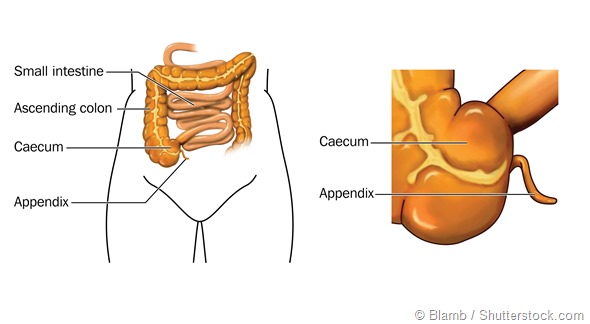 What causes appendicitis in children?

The appendix will swell up when infected and cause appendicitis. This can happen due to two main causes in children. The first is a bacterial infection, and the second is a small hard piece of feces getting stuck in the appendix tube. As the appendix swells, it seals itself up and the infection continues to grow within the vestigial organ. The infection can cause a lot of damage if the symptoms are ignored.

Symptoms of appendicitis in children

A burst appendix can make a child very ill. It is important to catch the initial signs so that the child can be treated before the appendix ruptures. A number of symptoms that parents should pay attention to include:

Once parents bring in a child who is already considered ill due to the low grade fever, possible nausea and tenderness of the belly region, the health care professional will ask for an ultrasound or computed tomography or CT scan to check for appendicitis. Blood tests and urine examination may also be recommended. After the information is all put together, appendicitis may be diagnosed.

There is no single test which will diagnose appendicitis hundred percent accurately. While rare, death from appendicitis can occur in neonates and infants because the physician is unable to diagnose it. This is primarily because the babies are too small to express the exact location of the pain. The symptoms are seen as irritability and weeping, which can be caused by a multitude of reasons.

If the infected appendix has not yet ruptured the child will be rushed to surgery. These days a laparoscopy can be performed. This is a surgical procedure done with the help of a camera inserted into the body. The minimally invasive technique uses the camera to determine where to make small incisions to complete the process of removal of the appendix. It is much better than having an open surgery which has an extended recovery period.

Once the infected appendix has been removed, fluid is passed through the abdominal cavity to flush out any residual infection in the region. This ensures that the child does not suffer from another bout of bacterial infection hitting any of the other organs in the abdomen. The fluid is drained out and then the surgeon will stitch up the small incisions made. The entire procedure usually takes roughly an hour to complete.

In case the appendix has ruptured, there will be a short delay in the actual surgery. The doctors will pump some antibiotics into the child using intravenous fluids. This helps reduce the risk of secondary infections developing post surgery. Plus the cleaning up of the abdominal cavity will be more complicated as there is no intact appendix to remove. Treatment will include a couple of days stay in the hospital. It could be longer in case of a ruptured appendix.

After care for children with appendicitis

Pain medication will be provided to the child after surgery along with an antibiotic course. The child is put on a liquid diet following the surgery so that the digestive system is not put under undue pressure. Over a week, the child will move from clear fluids to a regular diet. The dressings over the incisions will need to be checked and changed daily till the skin scabs.

Children are not discharged from the hospital till they have conquered the intermittent fever resultant from appendicitis. The health care professional will ask the parents to check for normal bowel function resuming. Ideally, the child should not go back to school for about a couple of weeks after the surgery. They should definitely be excused from gym and sports for at least 4 weeks after the surgery.

Parents should be on the look out for any swelling around the incisions. They should immediately contact the doctor in case the child develops fever, vomiting, bleeding, or pain in the incision area. There is a chance of secondary infections cropping up after the surgery and the parents need to stay alert.