The process by which the cellular components of blood are formed is called hematopoiesis and it is one that not only occurs during embryonic development, but throughout our lives. In varying stages of our lives, hematopoiesis occurs in different sites within us.

Early in the embryonic period, the process is centralized in the yolk sac of the developing embryo and later occurs inside the liver. Between the 3rd and 7th months of gestation it occurs in the spleen and as well as in the marrow cavity towards the latter half of this period. From birth onwards, hematopoiesis primarily occurs in the bone marrow. 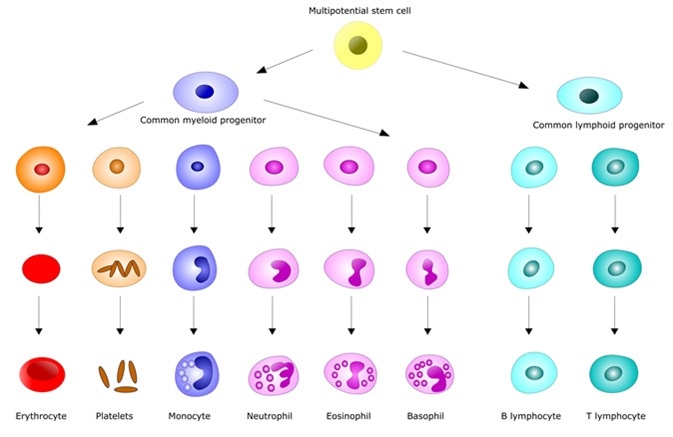 The extravascular compartment of the bone marrow has reticular connective tissue that forms the stroma and consists of developing hematopoietic cells within a parenchyma together with macrophages, plasma cells and adipocytes (i.e. fat cells). In a day, there is the formation of billions of erythrocytes, platelets and granulocytes together with almost as large numbers of monocytes and lymphocytes. This is a clear indicator of how highly active our bone marrow is on a daily basis. Furthermore, hematopoiesis is not its only function. This tissue is also responsible for many other pivotal physiological tasks such as functioning as a barrier, compartmentalization, and the removal of defective and aged red blood cells.

Hematopoiesis is theorized to work on the basis of a monophyletic construct, which means a single stem cell, also known as a pluripotent cell, gives rise to all of the different mature types of blood cells in our bodies. This monophyletic theory is the one most widely accepted and supported in literature. In contrast, there is the polyphyletic theory, which suggests that all of the hematopoietic cells are created from stem cells that are unique to them individually.

In the more widely accepted theory (monophyletic), hematopoietic cells are continuously generated from pluripotent stem cells, where some of these pluripotent cells become unipotential stem cells. Subsequently, some of the cells of this unipotential population differentiate into precursor cells that once differentiated are in part committed to becoming one of the mature types of blood cells, which are erythrocytes, monocytes, lymphocytes, thrombocytes and granulocytes.