Rice has been around for thousands of years and has supported a diversity of cultures in the eastern hemisphere. However, polished rice as a staple food has a much shorter history, having become a widespread practice in the 1970s only.

Polished rice refers to rice which has been milled to remove the husk, bran, germ, and varying amounts of the nutrients contained in them, leaving a starch-rich grain. In contrast, rice from which the husk has been removed but with the bran partly or fully left intact is also consumed in many pockets, and this is referred to as unpolished rice or brown rice.

Polished rice has less moisture, mineral, biotin, niacin, protein and fatty content than brown or lightly milled rice. The outer coat of the rice grain in brown rice (below the husk) is called the aleurone layer, which, along with the underlying subaleurone layer, contains most of these components. The greater acquired preference for polished rice is probably due to the change in texture (removal of insoluble fiber), the better digestibility, the easier chewing, and decreased protein content in this form. Polished rice is easier to cook and has a more delicate taste, which may account for its sudden rise in popularity in most parts of the world. 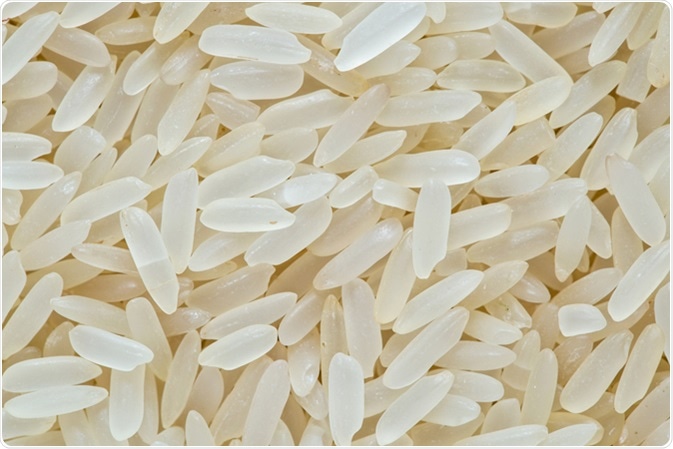 Whole grain consumption has been shown to be positively correlated with good health. The reason may be the increased content of fiber, minerals, vitamins, plant phenols, phytoestrogens and other bioactive phytochemicals. These include γ-oryzanol and tocotrienols (vitamin E precursors) in whole grain rice. However, very few people consume whole-grain rice, but a small percentage does prefer brown rice in which the outer husk has been removed. All whole grains contain roughly similar amounts of carbohydrates, and milling causes the loss of most of the aleurone layer which contains much of the vitamins and minerals. To compensate for this, many processed grains are enriched with these nutrients but fiber is difficult to add back without altering the taste.

Rice bran contains vitamin E (72% being in the form of tocotrienols) at about 180-390 mg/kg, and also a relatively high lipid content among food grains. The lipids include oleic, linoleic and alpha-linoleic acids, among unsaturated fatty acids, with palmitic and stearic acids among the saturated fatty acids, as well as tocopherols, policosanols, saponins and phytosterols. These fractions contain many different types of compounds with synergistic effects upon physiological functioning.

Other nutrients in the outer layer of rice include iron, zinc, and vitamin A.

Iron-deficiency anemia has been a major problem in all parts of the world, but especially in the developing regions with diets based on rice consumption. This includes the Middle East, Africa, Asia and some parts of South America. One cause for the 50% prevalence of anemia in women, and over 65% prevalence in children under five, is that polished rice loses most of its iron content, and this loss is usually not replaced by other sources of iron. Polished rice has only about 4 ppm, and this too has a low bioavailability.

Zinc deficiency is another danger in rice-reliant countries who eat mostly polished rice nowadays. It leads to impaired neurodevelopment, as well as lowering of immunity and thus increasing the incidence of diarrheal disease in the vulnerable pediatric population. Zinc deficiency thus pushes childhood mortality up, as well as being associated with intrauterine growth restriction, fetal anomalies and difficult birth. Stunting is a common associated effect in about 40% of children under 5 and over 80% of women in pregnancy.

Vitamin A in Rice Bran

Vitamin A is a fat-soluble vitamin which is closely associated with visual function, and whose deficiency results in xerophthalmia, night blindness and eventually full blindness. Rice contains little β-carotene (below 0.2 ppm) and this is confined to the bran, which is lost during milling. Thus, those who depend exclusively on polished rice consumption for their supply of staple carbohydrates are at high risk for vitamin A deficiency, which is a major health issue in preschoolers in over a hundred developing nations, with a prevalence ranging between 6% and 36%.

What Nutrients are Removed on Milling Rice?

All the nutrients in the whole grain are negatively affected by milling, and the more polished the grain, the greater the loss.

One such category is fiber-related components (phytic acid, tannins, trypsin inhibitor, and polyphenol). These are sometimes called antinutrients as they bind to calcium and iron within the gut, reducing their absorption, in addition tohindering protein and carbohydrate digestion. These are also strong antioxidants, however, and this beneficial effect should not and cannot be overlooked in studies of brown rice consumption.

Iron is also more bioavailable in polished rice, but unpolished rice and bran are richer in zinc and ash. However, the zinc-binding effects of phytate and bran fiber along with outer aleurone components make it imperative to supply other sources of dietary zinc with brown rice in order to prevent its deficiency.

By way of illustration, rice which has been 5% milled has lost 40% of its ash compared to 62% after 10% milling. The corresponding figures for other nutrients are as follows, for 5% and 10% milled rice respectively:

Health Benefits of Unpolished RiceDuring normal digestion, the gut enzymes contribute to releasing several antioxidants from the bran fiber. One such is phytic acid, long considered an undesirable, but now known to possess antitumor effects, prevent coronary heart disease, and have potent antioxidant activity as well as immune-stimulating effects. Polyphenols are another category of compounds which represent the richest source of dietary antioxidants, and though present in a quantity of 63 mg/kg, are largely lost during rice milling as they are in the aleurone layer.

Brown rice contains more insoluble fiber which was found to reduce mean blood pressure as well as systolic and diastolic pressures when consumed as part of the American Heart Association Step 1 diet.

Rice bran lipid components reduce serum cholesterol levels. Tocotrienols and tocopherols (at appropriate concentrations and relative percentages) are influential in regulating the key cholesterol synthetic pathway enzyme HMGCoA, which limits the rate of cholesterol production, in vitro, but this is yet to be confirmed in human studies, which have shown conflicting results, possibly due to the presence of confounding factors.

Policosanols are a complex mixture of plant alcohols which are known to reduce serum LDL cholesterol levels at doses between 2-40 mg/day. Γ-oryzanol and ferulic acid may also play a role in this health effect. Brown rice is richer in these compounds than polished rice.

Brown rice contains resistant starch at a 30% higher concentration than polished rice. This supports the growth of many intestinal microbes, generating beneficial and protective compounds, such as butyrate and other short-chain fatty acids. These may help restore damaged or inflamed intestinal mucosa to normal, reduce the absorption of toxic or mutagenic compounds, and encourage DNA repair.

The bioactive bran compounds offer another potential antitumor pathway. Adequate dietary fiber has long been associated with reduction in colon cancer risk, and this is particularly pronounced in familial colon cancers such as those complicating familial adenomatous polyposis. Rice bran also contains isoprenoids, of which tocotrienols, caffeic acid, vanillic acid, and triacin are examples, which have powerful anticancer properties.

Anthocyanins such as the 3-glucosides of cyanidin and peonidin can inhibit tumor cell motility and invasion of the basement membrane by suppressing the activity of a range of proteases. These are particularly abundant in colored rice.

Many epidemiologic trials show that refined starches as in polished rice increase the risk of type 2 diabetes by 11% per 250 g serving. When this is substituted with brown rice, this risk falls. Asians are at a higher risk of diabetes (55%) because of the greater postprandial rises in glucose and in insulin after a carbohydrate load, which is called the Asian phenotype, and is a potential precursor for the metabolic syndrome. This is made more significant by the fact that over half of the calories in the Asian diet come from starches and sugars of one kind or the other, and 83% as highly refined carbohydrates. The rising incidence rates of diabetes in Asia reflect this phenomenon, with the prevalence rising from 1% to 10% within 13 years in China, mostly among the middle-aged class, for instance. Thus, the shift from the consumption of unpolished rice to white rice has serious public health consequences.

Though brown rice may not look appealing at first look, is harder to chew, and requires longer to cook, its nutritional benefits may fairly be said to far outweigh these disadvantages. It is rich in fiber, many important vitamins, and a host of antioxidant molecules, besides the health effects of resistant starch. It should be exploited as a cost-effective way to supply healthy carbohydrates and reduce metabolic risk from refined carbohydrate consumption, besides its antitumor, immunostimulatory, antidiabetic and cardiovascular effects.