HbA1C testing is a test that measures the long-term control of glycosylated hemoglobin. HbA1C is hemoglobin (the oxygen-carrying molecule in the blood) which has bound glucose. While this binding occurs via enzymatic action under normal conditions, the kind of binding that accounts for HbA1C is non-enzymatic, depending only on the level of glucose and the time available for binding.

The level of HbA1C goes up with the glucose level, and thus a high HbA1C indicates that the level of blood glucose has been high over the last 3-4 months. In other words, it shows that the individual has poorly controlled diabetes mellitus. 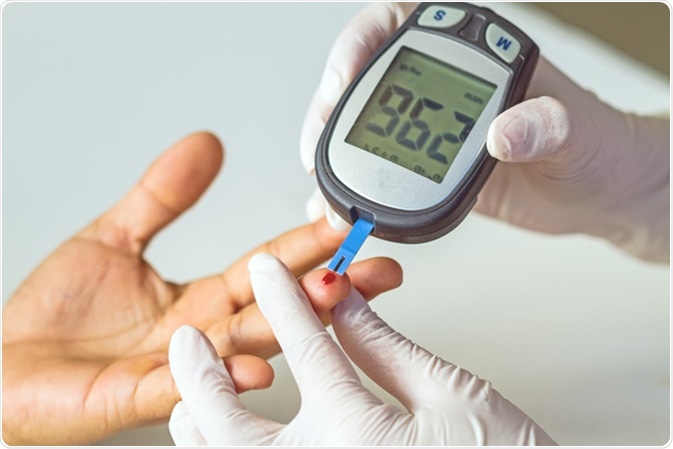 When HbA1C Testing is Done

The test is typically ordered at the time of initial diagnosis of diabetes and every 3-6 months following this diagnosis, according to some health guidelines. More frequent measurements are helpful if:

HbA1C testing is now used to diagnose diabetes as well, though formerly it was used only to monitor patients already diagnosed. The HbA1C test is better in many respects than the traditional fasting glucose measurement or the oral glucose tolerance test for diabetes diagnosis because of:

The blood for the test may be taken either from a vein (venipuncture) or from a finger (finger stick) depending on whether it is done at a laboratory or in the doctor’s office (or at home).

The Importance of the HbA1C Test

Diabetes mellitus is a killer disease, requiring careful and diligent management to reduce the danger of its multiple complications. If the blood glucose is effectively controlled from the time of diagnosis, the long-term patient outcome is better, even if control deteriorates over the later years. This means that the twin benefits of earlier diagnosis and better monitoring of blood glucose should cause better patient health. The convenience of the HbA1C test means that its adoption for diabetes detection can increase patient acceptance of testing as well as early detection rates, and thus better patient outcomes. On the other hand, its use for routine testing is more expensive than plasma glucose measurements which may be a constraint when health resources are scarce.

The primary importance of the HbA1C test is its ability to reflect blood glucose levels over a period rather than the particular moment of testing. This period mirrors the lifespan of the red cell which contains the hemoglobin, namely, 120 days. However, the level does reflect recent changes in the HbA1C value, because 50 percent of HbA1C is formed in the single month before the test sample is drawn, and 25 percent in the preceding month, with the remaining 25 percent reflecting the rest of the four-month period.

In 2010, HbA1C was taken up as a diagnostic test using this level of 48 mmol/mol as a cut off, which corresponds to a percentage level of 6.5%, according to American Diabetes Association recommendations. If the level of HbA1C is between 5.7 % and 6.4% the person is considered to be at increased risk for both diabetes and cardiovascular disease, and should be strongly advised to take up suitable lifestyle interventions to reduce this risk.

Each percentage of reduction in HbA1C levels causes a corresponding decrease in the risk of:

The test should be done using a NGSP-certified assay and repeated if the result is ambiguous. This is necessary to ensure laboratory-to-laboratory consistency and requires quality assurance programs to appropriate standards.

While handheld assays are not recommended for diagnosis they may sometimes be necessary as the only accessible option, but as a rule, the best available technology should be used.

Conditions which Interfere with HbA1C Testing

Any condition which increases the fragility of red cells, or which promotes non-enzymatic glycosylation of hemoglobin without high blood glucose levels, can cause false results from HbA1C testing. These include:

In such cases, another method of diagnosis should be used such as fasting plasma glucose levels. A discrepancy between two methods of glucose testing for diabetes should arouse the suspicion of any of the above conditions and lead to further diagnostic investigation.