Ginseng is a type of slow-growing perennial plant that belongs to the genus Panax in the family Araliaceae. The plant is also called Ginnsuu in some regions of China and other parts of Asia.

The term Ginseng is derived from the Chinese rénshēn, whererén means “person” and shēn means “plant root.” This Chinese term refers to the charactersitic forked shape of the plant’s root, which resembles a person’s pair of legs. The plant’s tapered roots are around 2 to 12 inches long and a tanned color. The English name is derived from the Cantonese pronunciation – “jên shên” and the Hokkien pronunciation “jîn-sim.”

The genus name Panax means “all heal” in Greek and shares the same origin as “panacea.” The genus was so named by Linnaes who was familiar with its application as a muscle relaxant in traditional Chinese medicine.

Ginseng is mainly found in North America and in the Northern Hemisphere of eastern Asia in areas such as Korea, Bhutan and eastern Siberia. The southernmost Ginseng known to exist was found in Vietnam and is called “Panax vietnamensis.”

Ginseng typically possesses compounds known as ginsenosides. There are various types and species of ginseng including Panax ginseng (Asian ginseng) and Panax quinquefolius (American ginseng). Various other plants are mistaken for the ginseng root, with common examples including Siberian ginseng (Eleutherococcus senticosus) and crown prince ginseng (Pseudostellaria heterophylla). The true ginseng plants are those that belong to the Panaxgenus.

Ginseng roots are usually sold in the dried form as a traditional medicine that is thought to provide various benefits as an aphrodisiac, stimulant and antidiabetes agent, as well as a treatment for sexual dysfunction in males. 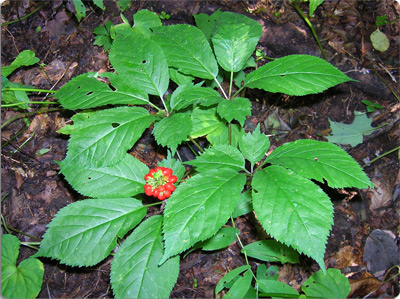 American ginseng (Panax quinquefolius) grows in rich woods through most of the eastern United States, including the mountains and upper Piedmont of North Carolina.

Some reported side effects of using ginseng include insomnia, nausea, hypertension, headaches and breast pain. The substance has also been shown to cause adverse reactions when used alongside warfarin, phenelzine and antidepressants.