Hemolytic uremic syndrome (HUS) is a serious renal disease, and the most common etiologic factor in the development of acute renal failure in children. Most affected children are younger than 4 years old, but the disease may also occur in older children and even in adults. 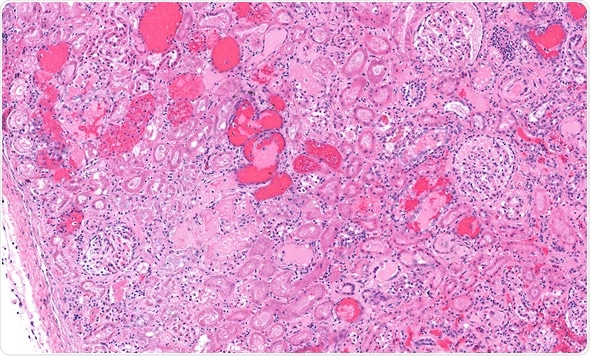 Kidney from a case of hemolytic uremic syndrome due to E. Coli. Nephritis due to E Coli. Hemolytic uremia. Image Copyright: vetpathologist / Shutterstock

There are two types of HUS, as detailed below:

Usually starting after a diarrheal episode, for which reason it was formerly also called D+HUS, it is a reaction produced by a strain of enteric bacterium called Escherichia coli(E.coli).

The specific variant is mostly Shiga toxin-producing E. coli (STEC) type 0157:H7. The children are usually between 6 months and 5 years, and have a history of watery diarrhea leading to hemorrhagic colitis 5-7 days before the onset of hemolysis and thrombocytopenia. Still later, the child develops oliguria or anuria.

This type is also called sporadic, showing no connection with a diarrheal episode (D-HUS), and seen mostly in adults. Many researchers suggest that other infections underlie this condition, such as human immunodeficiency virus (HIV) or pneumococcal infection.

Other contributing factors may include very severe forms of antiphospholipid syndrome or systemic lupus erythematosus. Some patients with atypical HUS following renal transplantation have developed it in reaction to calcineurin inhibitors.

Genetic forms of HUS are also included in atypical HUS. These include:

Most children with typical HUS first present with complaints such as abdominal pain, tenderness on palpation, nausea or vomiting and fever, but adults may not have any of these symptoms.

Diarrhea sets in later on, and after a week’s incubation the patient develops hemolysis and thrombocytopenia.

HUS is thought to be the outcome of hyperactivation of the complement system, which induces damage to the endothelial cells, mesangial cells, tubular epithelial cells in the kidney, monocytes and their derivatives.

Since there is an incubation period between the diarrhea and the hemolysis, it is important to test the blood in every STEC-positive pediatric diarrhea patient for evidence of thrombocytopenia and hemolysis, and doing Shiga toxin testing to rule out infection with this strain of E. coli.

Stool culture is also important in establishing the presence of this microbe, from the public health perspective. There should be a high index of suspicion when the patient develops diarrhea following the ingestion of hamburgers, because contamination of hamburger meat with this bacterium is the commonest cause of HUS in the United States.

Treatment of HUS is symptomatic. Various therapies which are used in this condition include:

In children, HUS may result in complications such as intussusception, chronic renal failure, and involvement of the central nervous system followed by epileptic seizures, coma, hemiparesis or stroke.

Completely recovery occurs in up to 85% of patients with D+HUS. Up to 12% of patients will die or enter end-stage renal disease. Recurrence of the illness is rare. D-HUS has a worse prognosis, and most patients do not recover completely.

At present the only mode of prevention is by avoiding primary infection with the bacterium.