It was Aschheim and Zondek (1928) who tested the urine of pregnant women and found that at least two distinct substances were present. One substance stimulated the ovaries to grow follicles, and the other produced a secretory change in the ruptured follicle following ovulation.

Gonadotropins are any hormones that stimulate the gonads, or sex glands, to carry out their reproductive or endocrine functions. In males, these glands are the testes, and in females the ovaries. Gonadotropins include luteinizing hormone (LH) and follicle-stimulating hormone (FSH), produced in the anterior pituitary, as well as the placental hormone, human chorionic gonadotropin (hCG). The cells in the anterior pituitary which produce gonadotropins are therefore described as gonadotrophs, and constitute ten percent of the gland. They are typically specific for a single hormone (either LH or FSH), though some do secrete both of them.

LH and FSH are large molecules composed of glycosylated proteins. They have an identical alpha subunit, but the beta subunit is different in each. This difference is responsible for the specific binding of each hormone to its own receptor.

FSH and LH are low during childhood. Their levels rise after puberty, with LH showing a more significant increase. They also rise acutely during the mid-part of the menstrual cycle, and again during the postmenopausal period. HCG is produced from the placenta and it is the basis of the pregnancy tests used today.

The physiologic actions of the gonadotropic hormones are on the ovaries and testes, and are essential for proper gonadal function. In their absence, most important aspects of reproduction fail and the individual is infertile.

LH binds to certain cells in the testes called the Leydig cells, by means of specific receptors. This leads to their role in synthesizing and secreting testosterone, the primary male sex hormone. In the ovary, LH binds to theca cells, the cells found in the ovarian capsule, which also produce testosterone. This is, however, destined to be transformed into the female sex hormone estrogen, in the adjacent ovarian granulosa cells surrounding the developing ovarian follicle.

A characteristic surge of LH takes place in females but not in males, which is called the preovulatory surge. It is timed to coincide with peak maturity of the ovum within the ovarian follicle, and causes ovulation within 24-72 hours. The large follicle breaks open at one point, releasing the mature ovum and some cells clustered around it, as well as the fluid inside the follicle, to be rapidly taken up by the neighboring fallopian tube where it travels to the uterine cavity. FSH also rises rapidly at this time but not with the same amplitude.

Following ovulation, the cells which were surrounding the developing ovum inside the follicle, called the granulosa cells, now multiply to form a small new solid structure in place of the fluid-filled follicle, namely, the corpus luteum (‘yellow body’). In fact, this characteristic change of the follicle into a small yellowish spot (luteinization) is responsible for the name of this hormone.

The corpus luteum cells produce large amounts of the female steroid hormones, progesterone and estrogen (mostly estradiol). Progesterone is essential to prepare the endometrium for implantation of a new zygote, should the ovum undergo fertilization within the fallopian tube. LH also keeps the corpus luteum healthy and functional if pregnancy supervenes, until the placental development has reached a stage during which hCG can take over the role of maintaining pregnancy. 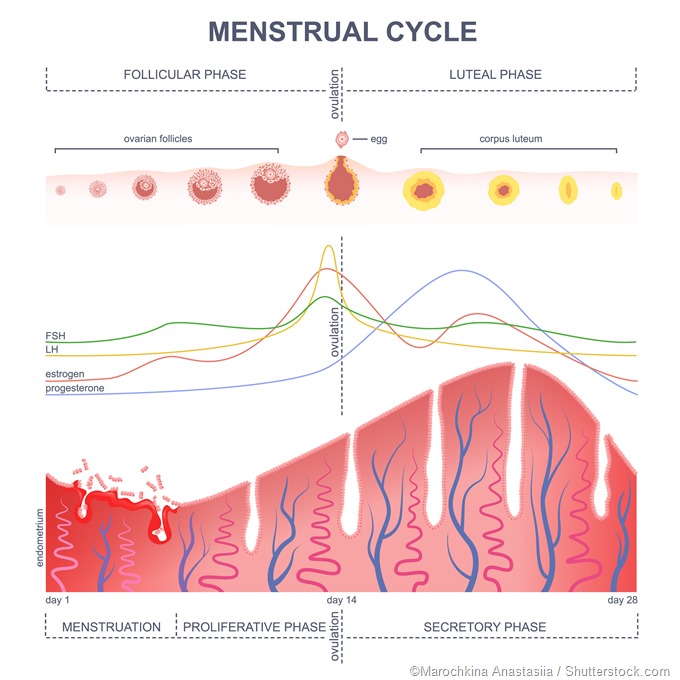 FSH is responsible for stimulating ovarian follicles to grow and mature so that ovulation can take place. When exogenously administered, it therefore hyperstimulates the ovaries, producing multiple mature follicles and several mature oocytes - this is instead of the typical single mature ovum produced in each ovarian cycle. 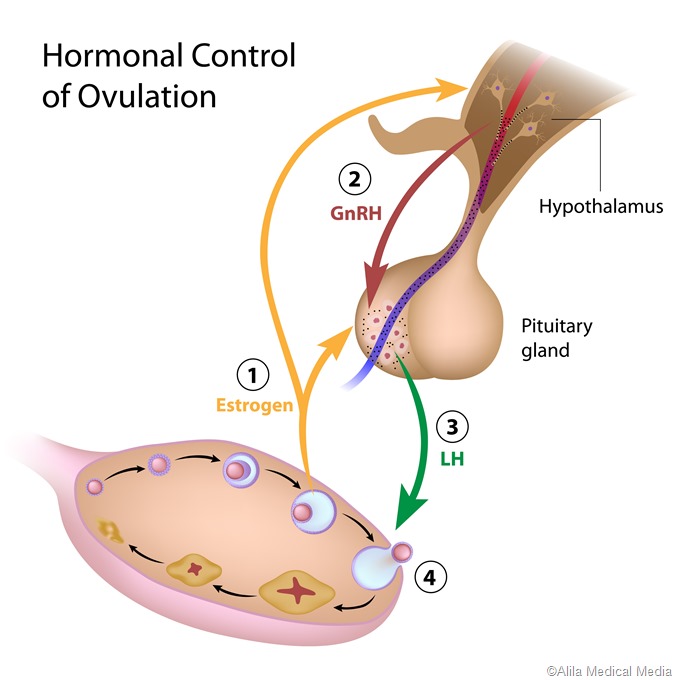 FSH also supports the function of special cells within the testes, Sertoli cells, which are required for proper sperm maturation. 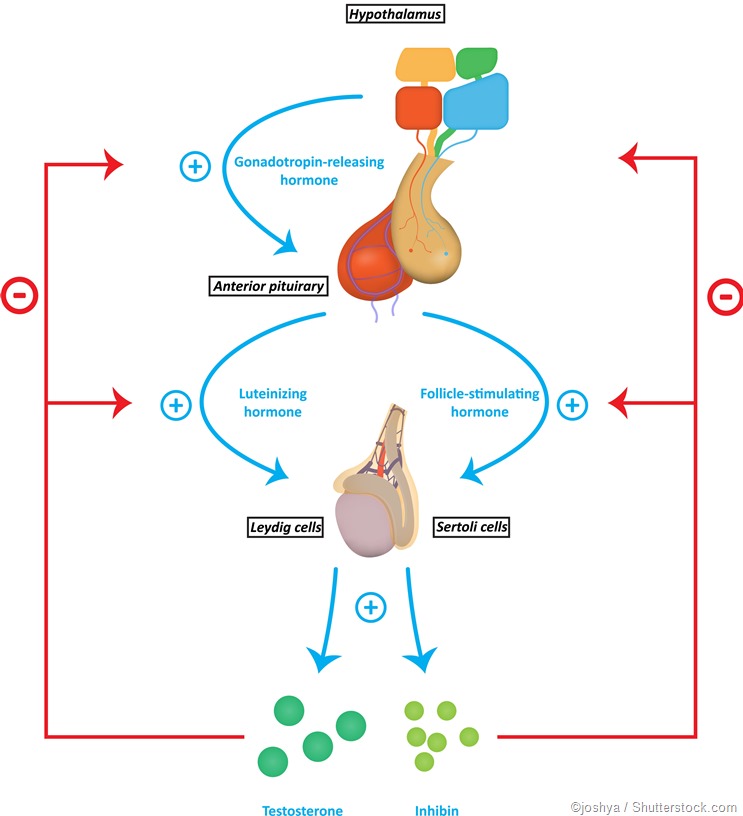 As the LH level rises in response to GnRH secretion, the production of testosterone, estrogen, and progesterone rises. These sex steroids now inhibit the hypothalamic secretion of GnRH to produce the classical negative feedback pattern. They also directly suppress the pituitary gonadotrophs.

For this reason, LH levels rise in pulses instead of in a constant manner. FSH also follows the same pattern, though not to so marked a degree. The number of pulses varies greatly, especially with the stage of the ovarian cycle in females.

Other hormones, namely, inhibin and activin, also play a role in the regulation of FSH secretion. These are produced in the gonads as well.

When gonadotropin secretion is decreased, gonadal function fails, leading to a condition called hypogonadism. It is manifested as oligospermia and amenorrhea in males and females respectively.

Isolated LH deficiency with normal FSH levels leads to the development of male hypogonadal signs and symptoms, accompanied by fertility because of the FSH-stimulated maturation of sperms. Such an individual is often called a ‘fertile eunuch.’

High gonadotropin levels, on the other hand, show failure of the negative feedback loop. This may be caused by castration or ovarian removal, but the most common cause in human beings is either gonadal failure, or the presence of a secretory pituitary tumor. The clinical effects of such a condition are minimal.

Gonadotropin secretion is essential to producing mature oocytes and sperms. For this reason, preventing normal LH secretion, in particular, leads to infertility. This is the mechanism of action of the widely used estrogen-progestin low dose contraceptive pills. They exert an inhibitory action on the gonadotrophs, as well as preventing the LH surge, and so suppress ovulation.

GnRH antagonists can also be used to suppress gonadotropin secretion. These agents block the GnRH receptor on the gonadotroph cells. Though this produces powerful contraceptive effects, their other effects prevent their use for this purpose.