Coconut oil has been one of the most important fats used in the diet in Asian and African countries which have a long coastline, due to the abundance of this very useful oil palm in such regions. Fats are an essential part of the diet because of their intrinsic value as structural and functional components of cell membranes.

They also act as carriers for fat-soluble molecules such as vitamin A and D, and as the beginning point for the synthesis of steroid hormones, prostaglandins and other bioactive molecules. On the other hand, high percentage of fat in the diet may lead to obesity and increased cardiovascular disease, diabetes – and even malignancy risk.

Coconut oil is usually made by drying the flesh of the coconut, and then crushing and pressing it in a mill to get the oil out. Virgin oil is made by a different process involving skimming off the creamy layer of coconut milk extracted from the freshly grated flesh. 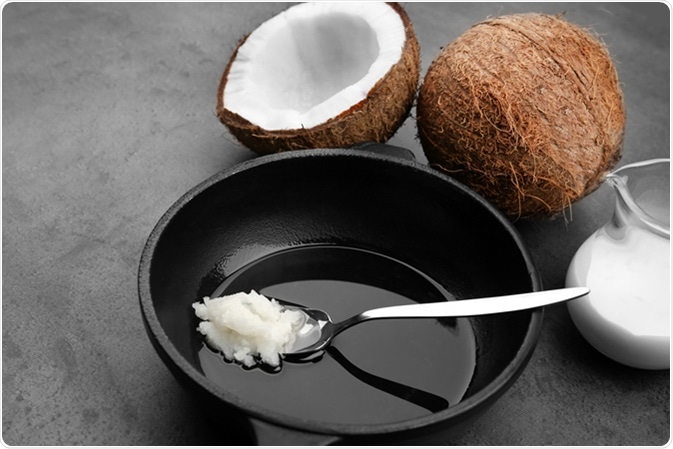 Coconut oil is rich in saturated fats and was therefore the victim of much misinformation for three or more decades. The standard allegation was that the consumption of saturated fat raises blood cholesterol levels, which in turn is proven to push up the risk of cardiovascular heart disease.

This was traced to a report on the danger of hydrogenated vegetable fat in heart disease, but was later dismissed as being due only to the saturated fat content in these oils and fats, while the real reason was the formation of trans fats during hydrogenation. The underlying rationale for such a consensus was economic rather than health-based, but the campaign was accepted as truth by other regions of the world because of the participation of health professionals and government bodies. As a result, even countries which had been using coconut oil for hundreds of years and had a very low incidence of heart disease showed a dramatic reduction in the use of this tropical oil.

Rather than contributing to obesity and cardiovascular disease, coconut oil has a long history of showing the ability to prevent it, as well as prevent other diseases such as diabetes, cancer, and infectious morbidity. It is a historical fact that Sri Lanka, which had a per capita consumption of 120 coconuts every year, also had a very low incidence of heart disease (as recorded in 1978).

In the United States, on the other hand, with polyunsaturated cooking oils and an extremely low usage of coconut oil, the prevalence of cardiovascular disease was 280 times higher during that same period. Yet, the onslaught of public health messages regarding the harmful profile of coconut oil, originating from the West, led to a successful and dramatic reduction in the per capita coconut consumption in Sri Lanka. It is interesting that this trend ended in an increase in cardiovascular disease in this country, especially in urbanized areas where coconut oil was largely replaced by other polyunsaturated oils in conjunction with an increased intake of refined flour and sugars.

Composition of Coconut OilTrans fats are created by hydrogenation of vegetable oils and are linked to increased risks of cardiovascular disease, gallstone disease, senile dementia, infertility and metabolic syndrome, among others. There is a small percentage of trans fats in dairy and meat products (bovine meats), but this is not known to be harmful to health.

Saturated fats make up about 90% of coconut oil. These comprise short-chain, long-chain and medium chain fatty acids (MCFA). Of these, about half is made up of MCFA, especially lauric acid and monolaurin which is derived from it. Other fatty acids in coconut oil include caprylic, capric, myristic, stearic, linoleic, oleic and palmitic acids.

A diet which improves cardiovascular health generally derives 30% of its energy from fat, of which saturated fat makes up 10% of the total energy. Fat digestion is in the small intestine and its percentage of absorption depends upon the length of the fatty acid chain.

MCFAs are absorbed without being degraded and then re-esterified in the liver. Instead, they undergo stepwise oxidation directly to produce energy. They do not form cholesterol in any form. Long-chain fatty acids (LCFAs), on the other hand, are esterified with carrier proteins to form chylomicrons, carried to the liver and broken down into free fatty acids. Following this they may either be re-esterified and stored as triglycerides, or oxidized to produce adenosine triphosphate (ATP) for energy.

The peculiarity of the composition of coconut oil is that it is rich in lauric acid, technically an MCFA, but one which is absorbed like an LCFA. Yet following absorption it behaves more like an MCFA and thus forms more pliable molecules of chylomicrons in the blood. Most studies focused on the dietary aspects of MCFAs have used capric and caprylic acid rather than lauric acid as the substrate, and so their findings are not directly related to the activity of coconut oil.

The fats in coconut oil do raise the level of total cholesterol, but they also increase the size of the cholesterol molecules, making them less dangerous to the heart. They increase ‘good’ HDL levels disproportionately, rendering or keeping the heart attack risk low. They also improve insulin sensitivity, keeping blood sugar levels normal and preventing the tendency to deposit fat around the vital organs.

Coconut oil has documented antiviral activity against Epstein-Barr virus, influenza, hepatitis C virus and other pathogens due to  the presence of the MCFA destroys the integrity of the viral membranes and prevents virus assembly. Hence it may represent a cheaper method to combat infections in developing regions of the world. Furthermore in vitro studies have shown that lauric acid has an anticancer apoptosis-promoting effect on colon cancer cells.

Again, fats like coconut oil have a higher smoke point (the point at which they begin to smoke constantly when heating up). This makes it suitable for cooking and for shallow frying. The smoke point is directly in proportion to the percentage of free fatty acids (which volatilize faster) in the oil, and is therefore lower in reused oils.

Apart from these undisputed health benefits, it is quite clear that encouraging developing economies to become self-reliant by depending on their own home-grown agricultural products, including cooking oil, is the right way to foster national growth in these regions of the world.

In conclusion, medical and health associations worldwide should aim to correct the earlier negative publicity about coconut oil and highlight a plethora of striking benefits of this natural fat. At the same time, it is not wise to depend solely upon coconut oil to keep one healthy, while not maintaining a healthy diet in toto - that is, one which is low in processed foods and total fat, and contains adequate minerals, vitamins, fiber and complex carbohydrates (with the required high-quality protein intake from fish, poultry or vegetables rather than red meat).