Neuroanatomy is the study of structure and function relationships in the brain and nervous system. As this encompasses a study of both macroscopic and microscopic structures, a variety of histological tools have been developed to enable that endeavor. 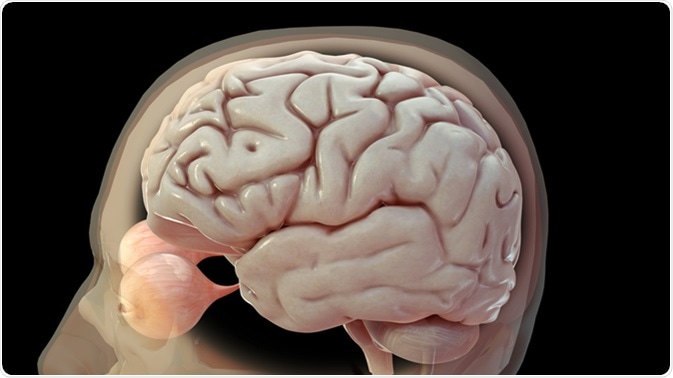 Microscopy is an important technique for studying the structure and function of the nervous system. This is enabled through the use of histological staining, in which a tissue of interest is preserved and sectioned, and then stained using one of an array of techniques.

Histological staining provides contrast to the tissue so that details can be distinguished. For example, gray matter contains neuron cell bodies, or somata, that can be stained to become visible under a microscope. Nissl stains are useful for gray matter. For white matter of the brain, dyes such as Luxol Fast blue are useful. Using these dyes, the myelin sheath surrounding the axons can be successfully visualized.

A special type of microscopy is fluorescent microscopy, where green, red and blue fluorescent dyes can be used to visualize structures of the brain. Proteins of interest can be tagged with the dyes, and when illuminated at their excitation wavelength, the dyes emit fluorescent light, highlighting the desired structure.

Immunocytochemistry is a type of histochemistry that makes use of antibodies to visualize cell types, axons, neuron structures, glial processes, blood vessels, or molecular components of cells like neurotransmitters and intranuclear proteins. Immunocytochemical studies can also be used for genomics studies of nervous system cells. Combining these techniques with a fluorescent stain allows visualization of enzyme binding sites and reactions.

In situ hybridization is also an important histochemical tool for neuroanatomy studies. It uses synthetic ribonucleic acid (RNA) probes to visualize complementary messenger RNA (mRNA) transcripts of genes in the cell. This can help to reveal gene function.

In one study, a detailed and complete histological description of the canine postrema (i.e.a structure in the brain responsible for vomiting) was carried out using common histological and immunohistochemical techniques. Samples from ten different dogs (6 female and 4 male) were collected following necropsy and fixed in 4% formaldehyde solution.

The brain was then sectioned into two centimeters thick transverse sections and embedded in paraffin. Four micrometer sections were then collected for histological examination. The researchers used haematoxylin-eosin staining initially, followed by specific stains for connective tissue, basement membrane glycoproteins, myelin, and Nissl substance. Researchers identified the AP, a sensory circumventricular organ, in all dogs on the dorsal surface of the medulla oblongata, and differentiated three distinct zones.

In another study using rat brains, researchers documented restricted distribution of vitamins with the goal of developing an antiserum for pantothenic acid. They used ELISA, a type of immunohistochemical assay, and through an indirect immunoperoxidase technique they were able to map pantothenic acid-immunoreactive structures in the rat brain. Those structures were found exclusively in the immediate part of the lateral septal nucleus.