The term dermatitis refers to inflammation of the skin and is usually characterized by a rash, itching and skin lesions such as blisters or pustules that may leak and crust over. A sensation of tingling, burning and stinging are other typical features. 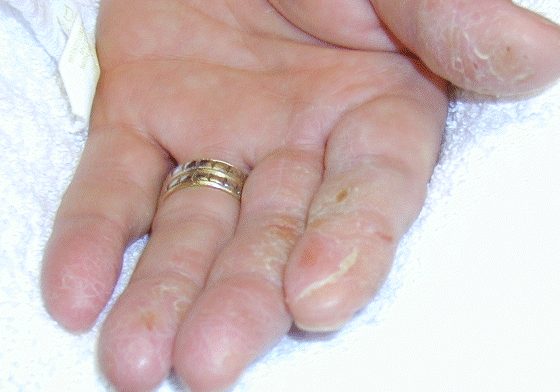 Contact dermatitis
Contact dermatitis describes a skin condition that occurs in response to contact with a certain substance. This may be an irritant that physically damages the skin or an allergen that provokes an immune response which causes skin symptoms. Redness and stinging usually manifest first and blisters may develop which can burst and increase the risk of skin infection.

Occupational dermatitis
This is the term used to describe a type of contact dermatitis that is caused by exposure to an agent in the work place. This condition is one of the most common causes of illness at work. Preventing the skin from coming into contact with the agents or that chemicals trigger a reaction is vital in controlling this condition.

Clothing dermatitis is commonly the result of permanent press finishes used in the manufacture of uniforms and other clothing items. Detergents and fabric softeners result in a similar pattern of dermatitis. The axillary vault is typically spared, with dermatitis involving the rim of the axilla. Image Credit: CDC

Some other types of dermatitis include:

Nummular eczema - red, dry and itchy skin develops, usually on the forearms, chest, back or abdomen.

Seborrheic dermatitis - a long-term disorder affecting areas of oily skin where sebaceous glands are present such as the face, scalp or inside of the ears.

Neurodermatitis - a condition that causes an overwhelming urge to scratch due to irritation of the nerve endings underneath the skin.

Stasis dermatitis - This is caused by varicose veins affecting venous drainage and causing blood to pool in the legs.