Miliaria is the term used to describe conditions associated with sweat retention in the skin. The flow of sweat is obstructed, meaning it stays trapped within the skin, rather than moving from the sweat glands to the skin’s surface. This gives rise to various symptoms and signs including skin lesions.

The condition most commonly arises as a result of exposure to warm, humid weather, although it can develop simply because a person is overdressed, overweight, hospitalized or bedridden. 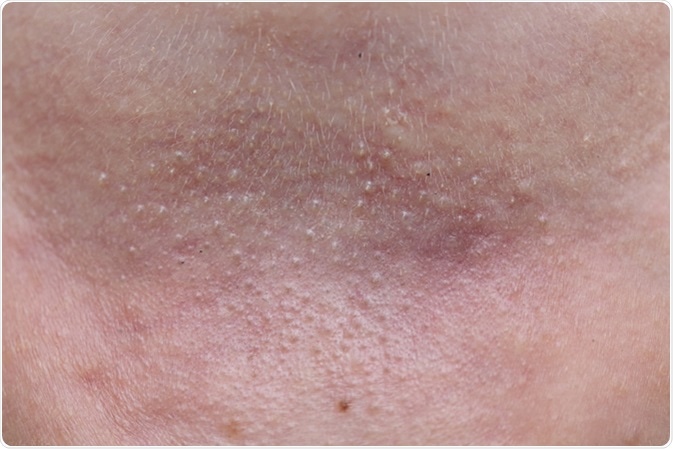 Also referred to as sudamina, miliaria crystallina describes sweat duct obstruction in the uppermost epidermis, with sweat retained to form subcorneal vesicles. These clear, non-inflamed, fluid-filled blisters and bumps (papules) rupture easily and even light rubbing can cause them to break.

This condition is also referred to as prickly heat and refers to the retention of sweat which moves into the middle layers of the epidermis and the upper dermis. This leads to itching and redness around the sweat pores, as a result of an inflammatory response. Other symptoms include irritated bumps and an itching or prickling sensation. The condition is particularly common among infants, but adults can also develop it, especially after repeated exposure to heat and humidity. Time spent in a cool environment usually resolves the problem after about one day.

Sometimes, the vesicles in miliaria rubra take the form of inflamed pustules, as opposed to papules, in which case the condition is referred to as miliaria pustulosa.

This refers to the formation of miliaria when sweat moves from the ducts into the dermis, which can happen when heat is intense. Hard, flesh-colored papules develop that are much larger and more deeply located than the papules seen in miliaria rubra. They also tend to be painful.

Miliaria can usually be resolved by cooling the skin and avoiding the heat or humidity that triggered it. An air-conditioned environment is ideal. If symptoms last more than a few days or seem to be worsening, then medical attention should be sought. Affected individuals should also consult a physician if they notice any signs of infection such as: