Renal function tests are performed to evaluate how well the kidneys are doing their job of filtering out nitrogenous waste from the blood. They involve the measurement of various substances in both blood and urine in order to estimate the filtering efficiency of the kidneys. Chronic kidney disease (CKD) rarely produces any symptoms, until the critical kidney reserve is passed and kidney failure sets in. Therefore, assessment of renal function is important for early detection of CKD. 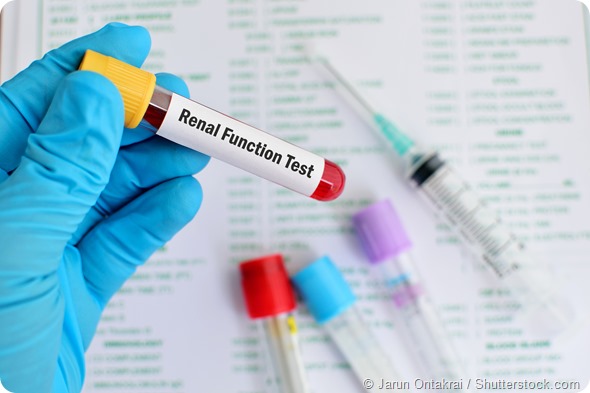 Renal function tests are important for:

An individual who is at risk for kidney failure is advised to have regular tests to pick up any deterioration in renal function. Risk factors include:

Renal function tests are intended to provide an assessment of the glomerular filtration rate (GFR). GFR may be thought of as “the volume of plasma cleared of an ideal substance per unit of time”, expressed in ml/min, standardized to body surface area. To assess the GFR, a substance which is freely passed, unchanged, through the glomeruli and renal tubules, is used. A GFR of 60-89 ml/mi/1.73 m2 is considered to be normal.

Creatinine in the body is produced by the metabolism of the amino acids creatine and phosphocreatine, and a small amount is the result of meat ingestion. It is produced at a constant rate (±8%) provided renal function is conserved. It is freely filtered by the glomeruli, and is not reabsorbed, but up to 15% undergoes active secretion in the nephron. Therefore, it is close to being an ideal substance for GFR measurement.

While formerly used to measure the GFR, creatinine clearance has now fallen out of favor because of the 24-hour period of urine collection required. This is so demanding that inaccurate collection volumes are the result. The measurements may also vary by up to 25%.

Creatinine clearance is calculated by the formula below:

While the active secretion of creatinine results in a falsely high urine creatinine, this error is stable and predictable, yielding an accurate picture of the GFR.

Urea is a waste product of protein metabolism. It is less consistent than serum creatinine levels in assessing renal function, as it is also affected by many other factors, such as a high intake of protein, corticosteroid treatment, muscle wasting diseases, or significant hemorrhage into the gastrointestinal tract. In addition, up to half the urea may be reabsorbed within the nephron, especially in the earlier stages of renal disease.

Iothalamate radiocontrast or radioisotope injection may also be used to measure the GFR directly. These agents are administered as a single dose, followed by measurement of their plasma levels over time. The rate at which plasma levels decline reflects the GFR. A major disadvantage is the large increase in sampling times with advanced kidney failure. In addition, radioisotope use requires special precautions during handling and disposal, and is not suitable for pregnant subjects.

Albumin is a protein found in blood, and is normally not filtered into the urine. However, if the kidney is damaged, it allows some amount of albumin to escape into the urine. Other names for the test include:

When the urine albumin is above 30, it could mean that kidney damage is present.

This measurement is used in patients receiving dialysis, to provide a picture of the remaining percentage of renal function. The mean of the urea and creatinine clearance is more accurate than either value individually, because the individual variations between the amount of urea reabsorbed and the amount of creatinine that is actively secreted compensate for each other.