Dermatofibromas are small dark nodules forming slowly on an extremity, mostly in the middle aged population, and occurring slightly more often in women than in men.

There are several variants of dermatofibroma, which may differ considerably in their clinical presentation. 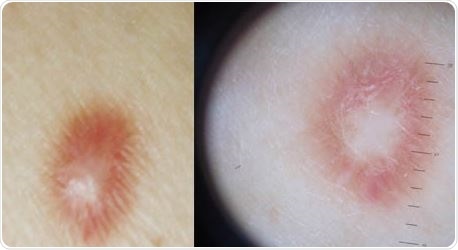 Example of a patient with dermatofibroma. ©Dermatologia Online/ flickr.com.

The diagnosis of a common fibrous histiocytoma is straightforward in most cases, with the mass being less than 1 cm in diameter, ranging in color from pink through tan to red, and with a slightly rough or acanthotic surface. It is typically not painful or inflamed, and is solitary in most cases. It is associated with a positive dimpling sign which indicates epidermal tethering to the underlying nodule.

In most cases, the dermatofibroma is asymptomatic except for the bump it makes. It is therefore simply left alone unless:

This may especially apply in situations in which the nodule could be a skin carcinoma or melanoma.

For this reason, any lesion which is unusually large, grows rapidly, looks atypical, is irregular, or occurs at an unusual site, might be better excised, including subcutaneous tissue. The specimen will then be sent for histopathological examination to rule out malignancy.

It should, however, be noted that in some cases the excision of the dermatofibroma leaves behind a more conspicuous scar than the original lesion. Knowing this, such procedures should be avoided for merely cosmetic reasons if it looks normal.

Following local excision, the recurrence rate is significant, being 20 percent for several subtypes. In several cases of skin growth excisions for supposed benign tumors, the pathologic report has shown the presence of skin cancer, and therefore all excised tumors should be sent for biopsy.

Elliptical excision, or punch biopsy, including the subcutaneous tissue is usually the best method to remove the tumor completely and minimize the rate of recurrence. In contrast, cryotherapy, laser treatment, and shave excision are all techniques associated with a greater risk of incomplete excision. Laser treatment involves the use of the pulsed dye laser, or carbon dioxide laser for multiple facial dermatofibromas. Intralesional injection of corticosteroids has been tried but the results are not predictable.

While dermatofibromas are usually benign, in very rare cases, cellular dermatofibromas may metastasize. For this reason, any lesion which recurs should be followed up carefully to rule out malignancy. The same follow up should be performed for lesions which show atypia on histologic examination.

Unless complete excision is done, most dermatofibromas remain the same and persist throughout life; the cellular variant grows over time. Shaving the area in which the tumor occurs may cause repeated injury and microtrauma.

Metastasis may occur very rarely, but local recurrence is more common with some variants which exhibit a more aggressive behavior. These include the aneurysmal type, which sometimes appears to be a vascular tumor. Again, a very large dermatofibroma, over 5 cm in diameter, and growing rapidly, may indicate either an aneurysmal or cellular subtype. Both of these, as well as atypical and deep dermatofibromas are known to recur in up to a fifth of the patients.

Dermatofibromas are generally uncomplicated and asymptomatic lesions, but some complications may occur: