Artificial insemination is a technique in which sperm is placed into a woman’s cervix or uterus. These procedures are called intracervical or intrauterine insemination (IUI), respectively.

In vitro fertilization (IVF) is an assisted reproductive technology (ART) technique which is more effective and has broader indications than IUI. It is the basis of most ART today, and has several different variations, including the use of donor or homologous oocytes and donor or homologous sperm.

IUI is the AI technique most commonly used. The fallopian tubes must be assessed prior to the procedure to rule out scarring or endometriosis, because fertilization of the oocyte by the sperm occurs within the tubes.

The basic steps in IUI involve initial ovulation induction with clomiphene citrate, while intercourse is timed to occur around the date of ovulation so as to promote natural conception. The woman is monitored for ovulation using various self-testing, or imaging techniques. On the day, sperm is collected from the male partner and washed, to finally be inserted into the woman’s uterus using a fine catheter.

Following three cycles, if pregnancy does not occur, clomiphene is continued for another three cycles, and IUI is performed around the time of ovulation.

If this too does not result in pregnancy, ovulation is further stimulated with injectable gonadotropin-stimulating hormones followed by IUI. Failure with this will probably lead to a recommendation for IVF.

IVF is far more complicated, and involves the following steps: 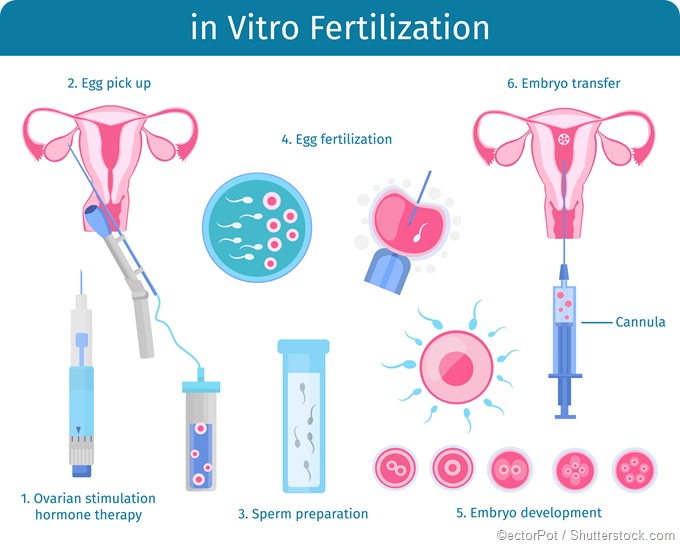 Advantages of both techniques

IUI has the double advantage of being comparatively inexpensive and uncomplicated, and is therefore often advised first for mild unexplained infertility or male infertility. Its pregnancy rates are significantly lower, however, ranging from 20-33 percent, with an overall success of 75 percent with 12 cycles.

In addition, the risk of multiple pregnancy ranges from 20 percent for twins to 40 percent for higher-order pregnancies. Despite its advantages, therefore, the gonadotropin-stimulating hormone step is often bypassed if the woman fails to conceive by then, and IVF is directly resorted to instead. IUI is also not useful in women without intact and functioning fallopian tubes.

IVF, on the other hand, is suitable for women with damaged tubes, as well as for couples with endometriosis, male factor infertility, or unexplained infertility. Its variations include gamete intrafallopian transfer (GIFT) or zygote intrafallopian transfer (ZIFT), if the woman has at least one fallopian tube that is properly functioning to receive the gametes (namely, the sperm and the oocyte), or the zygote (following in vitro fertilization).

Success Rates of IUI vs. IVF

IUI results in a significant number of pregnancies especially with unexplained infertility. The average live birth rate is as follows:

While the pregnancy rate for IVF is relatively high, not all conceptions result in a live birth. Recent CDC statistics report a 31 percent per cycle live birth rate. However, this depends on many variables, including the female age, the duration of infertility, and the type of oocyte or sperm used. Success varies with the age of the woman, as follows:

Risks of IUI vs. IVF

IUI carries a slightly increased risk for major congenital malformations and chromosomal or gene defects. Many of these genetic abnormalities may contribute to the male infertility which is the reason for treatment.

However, a hidden danger with IVF is that these defects are largely bypassed rather than prevented or treated, especially with ICSI. Follow-up at 10 years shows that most children born following IVF were healthy with respect to physical, emotional, and cognitive development.

However, the perinatal outcome for all babies born through IVF is significantly worse than for those who are naturally conceived. Multiple pregnancies, low birth weight, preterm birth, and neonatal hospitalization, are all increased in women who undergo IVF.

This is especially so with ICSI, because it allows infertility due to male factor to be perpetuated in the offspring by bypassing the natural inbuilt barriers. Its use has jumped five-fold to 65 percent of ART, indicating that it may be overused, since the proportion of cases due to male infertility is essentially unchanged. Some evidence points to the conclusion that indiscriminate use of ICSI does not help, and may even reduce pregnancy rates with ART.