Ginger (Zingiber officinale) is a tropical plant with long green leaves and a thick underground stem or rhizome. It has a potent spicy fragrance and flavor and is widely used to add a piquant touch to curries, soups and beverages. It contains an oleoresin, which is rich in 115 bioactive components, such as [6]-gingerol, [4]-gingerol, [8]-gingerol, [10]-gingerol, [6]-paradol, several shogaol (in the dehydrated form), the gingerdiones, hexahydrocurcumin, tetrahydrocurcumin, and gingerenone A. Its use is generally considered to be safe.

Besides these culinary applications, ginger was exported as a medicinal herb from India to the Roman empire, more than 2000 years ago. It has been associated with a host of healthy effects on the body, such as the treatment of stomach ache, diarrhea, nausea of gastric upset, pregnancy, motion sickness or chemotherapy, and inflammatory conditions, such as rheumatoid arthritis and osteoarthritis.  It is used as a dietary supplement in fresh or dried root form, pills, capsules, or liquid extracts. Some of the most common uses of ginger include the treatment of indigestion, controlling nausea, and relief of flu-like symptoms in common cold. 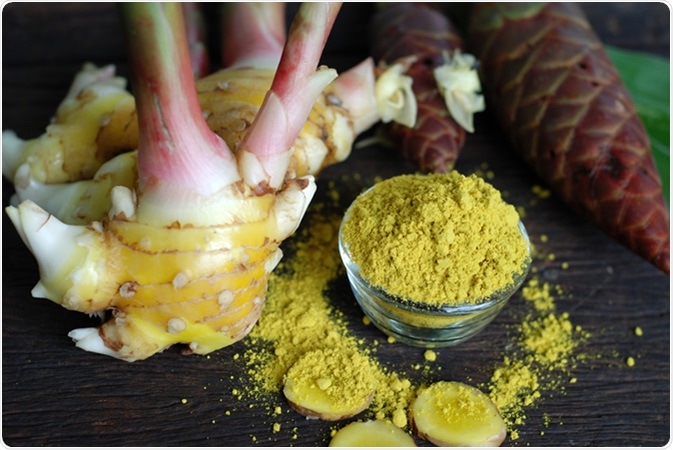 The following are some of the better-known uses of ginger:

The evidence is strong that ginger helps to relieve nausea in cancer chemotherapy, as an adjunct to standard medication, as well as in pregnancy. Other applications are supported by weaker evidence.

Ginger contains several phenolic compounds (gingerols), which soothe an irritated gastrointestinal mucosa, increase salivary secretion, stimulate bile production, increase gut motility, and reduce gastric spasms. It increases the secretion of the powerful proteolytic and lipolytic enzymes trypsin and pancreatic lipase and may have a positive effect in constipation and in preventing colon cancer.

Ginger tea or candied ginger, or even chewing fresh ginger, are all ways to combat chemotherapy-induced nausea, and help to reduce nausea during travel, though the actual incidence of vomiting is not reduced.

Another part is contributed by the central effect of ginger compounds on the serotonin receptors in the brain as well as direct action on the gastrointestinal mucosa.It is also helpful in pregnancy-related nausea. In all of these situations, part of the effect is due to its carminative action, which helps to break up the gas trapped in the intestines and stomach and drive it downwards through the rectum.

In nausea during pregnancy, it has been reported to be as effective as dimenhydrinate or pyridoxine (vitamin B6), with fewer adverse effects. Overall, it may be prescribed to reduce nausea in a variety of situations.

Ginger for a Workout

Ginger can be included in the daily diet and reduces the soreness of muscles following rigorous exercise by about a fourth, as well as being helpful in relieving the uterine cramps of dysmenorrhea.

As an anti-inflammatory agent, ginger is among the oldest compounds in use. It is also useful in osteoarthritis. This may be due to its inhibition of prostaglandin and leukotriene synthesis.

Ginger has potent antioxidant actions, since it contains one of the highest levels of antioxidants in the natural world. It thus neutralizes oxidative stress, such as that caused by TPA, which is a powerful oxidative molecule. As an antioxidant, it inhibits the production of superoxide and lipid peroxides, inhibits iNOS activity, and maintains reduced glutathione levels.

Some cancer studies show a reduced risk of colorectal cancer with the use of ginger supplements. This may be due to its antioxidant activity, as well as its ability to regulate several proteins, which are involved in the cell cycle, such as NF-κB, STAT3, MAPK, PI3K and a host of others.

Ginger is also useful in reducing blood lipid levels and clotting factor activity. It also helps to keep blood glucose levels normal. Thus, it has the potential to help promote cardiovascular health and prevent diabetes. It can help stimulate weight loss. In pregnancy, it may help increase milk secretion.

Ginger may be of use in clinical conditions when taken as a supplement or as a flavoring agent for food, or in the form of a herbal beverage. However, in some patients, it may cause a fall in blood pressure and hypoglycemia, as well as stomach irritation, ulceration of the small intestine, heartburn and symptoms of an irritable bowel in susceptible patients. It may rarely precipitate an irregular heartbeat or an allergy.

This may be of concern in pregnancy, especially if the woman is already on antiarrhythmic drugs or experiencing other complications.

Experimental evidence suggests a radioprotective effect as well, again due largely to its ability to counteract oxidative stress. It may inhibit bronchoconstriction in asthma by blocking calcium channels, and reduce hypersensitivity of the airways.

In conclusion, the proved benefits of ginger are many and significant, and the lack of knowledge about the biological mechanisms that underlie these effects should not deter one from making an informed and wise use of this useful spice.