Thyroid enlargement, commonly known as goiter, may have several possible causes. Any individual may develop goiter. The risk increases with age over 40 years, and women are more likely to be affected than men.

Goiter usually occurs as a result of a change in the function or structure of the thyroid gland, which causes it to become enlarged. The most common causes are covered below. 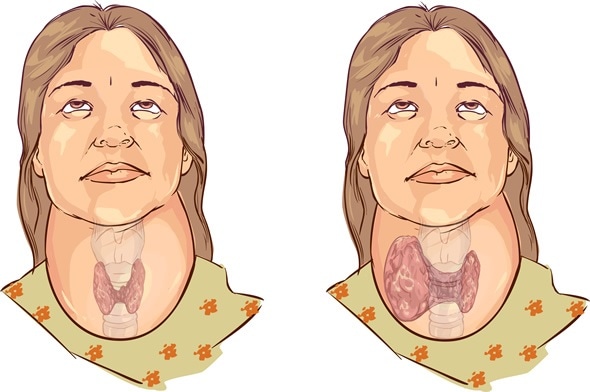 Both an overactive and an underactive thyroid gland, known as hyperthyroidism and hypothyroidism respectively, have the potential to cause goiter.

Graves’ disease involves the formation of an antibody called thyroid-stimulating immunoglobulin. This targets the thyroid gland, causing it to produce more thyroxine. This need to increase thyroid hormone production stimulates the thyroid gland to grow larger.

Hashimoto’s disease is an autoimmune disorder that causes damage to the thyroid gland, which in turn causes the underproduction of hormones. In response to the deficiency of thyroid hormones, the pituitary gland produces more thyroid-stimulating hormone (TSH) to stimulate the production of thyroid hormones, which causes the thyroid to become enlarged.

For example, during pregnancy a hormone called human chorionic gonadotropin (HCG) is produced. The increased production of this hormone can result in swelling of the thyroid gland.

Iodine is a trace mineral that is naturally found in fish and plant foods, and is essential in the production of thyroid hormones.  When there is insufficient iodine available in the body, the hormone level drops. This stimulates the release of thyroid-stimulating hormone (TSH) from the pituitary, which causes the thyroid gland to enlarge in an attempt to make more thyroid hormone.

Individuals with a low dietary intake of iodine are more likely to be affected by goiter. People who live inland or at high elevations are commonly deficient in iodine, as a result of lack of access to foods naturally high in iodine levels, and are therefore at risk of goiter. Additionally, some foods such as cabbage, broccoli and cauliflower can worsen the deficiency by inhibiting the production of thyroid hormones.

There are some medications that have the potential to cause goiter in some circumstances. For example, lithium, a medication that is often used to treat some psychological disorders or mental health conditions, can occasionally lead to goiter. Amiodarone is another medication that has been linked to increased risk of goiter.

Inflammation of the thyroid gland, known as thyroiditis, may also be associated with goiter. This can lead to either overproduction or underproduction of thyroxine, along with thyroid enlargement, often painful.

Radiation treatment directed towards the neck or chest area where the thyroid gland is situated can affect the function of the thyroid gland, and potentially cause goiter. This is often seen with patients who have undergone radiotherapy for neck cancer.

Nodules or Cysts in the Thyroid Gland

Thyroid nodules or cysts are solid or fluid-containing tissue growths within the thyroid gland. They can also affect the function of the organ, and may lead to the presentation of goiter. The majority of these nodules are benign, but in rare cases they may be malignant. For this reason, it is critical that further investigations are made if a nodule or cyst is the suspected cause of goiter.