A runny nose is caused by excessive fluid produced by and draining from the tissue in the nose and nearby organs, including the vascular bed in the nasal mucosa and the sinuses that are situated paranasally. The type of fluid that runs out may range from clear to thick and mucoid, or yellow-green purulent secretion. The route of drainage may be through the nose or down the throat, the so-called postnasal drip, though both may be present. 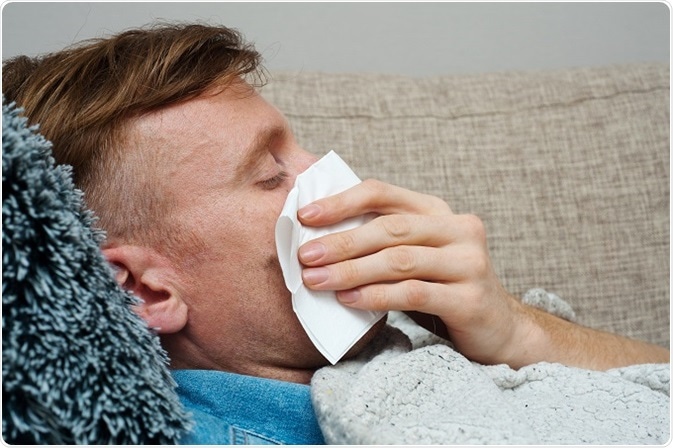 The presence of a runny nose or rhinorrhea usually refers, however, to a thin and clear copious nasal discharge. It may sometimes be associated with nasal congestion.

Many agents and conditions may cause runniness of the nose, including any substance that irritates or causes inflammation of nasal tissue. This includes:

Viruses such as the rhinovirus, influenza or respiratory syncytial virus can make the nose run.

A nasal discharge, usually greenish or yellow, may accompany acute or chronic sinusitis.

A wide range of allergens may awaken hypersensitivity reactions and cause histamine release and rhinorrhea, including dander, pollen grains, dust, nicotine, formaldehyde and sulfur dioxide.

Many substances such as capsaicin, the substance found in hot peppers, might irritate the nasal mucosa intensely by creating a rapid osmotic change, which induces plentiful rhinorrhea. Tobacco smoke is also a known irritant in some individuals, as are strong perfumes and odorous chemicals like new paint.

Also called vasomotor rhinitis, this condition produces chronic runniness without obvious cause. Changes in air pressure or temperature, or exposure to caustic chemicals, may cause irritant rhinorrhea. Other forms include senile rhinorrhea and nonallergic rhinopathy.

One infrequent, but serious cause of a runny nose is the leakage of cerebrospinal fluid (CSF) through a breach in the dura mater, the tough membrane overlying and protecting the brain. It follows head trauma or surgery, but is sometimes spontaneous.

Miscellaneous and less frequent causes of a runny nose include nasal polyposis, foreign bodies, tumors and migraines. Vascular conditions, such as Churg-Strauss syndrome, may also be associated with nasal discharge. Withdrawal from drug addiction may also sometimes precipitate nasal runniness.

It is sometimes important to know the cause of a runny nose especially in infants, in whom it may progress to a life-threatening infection. Some ways to distinguish a serious from a minor cause of rhinorrhea are: