Rheumatic heart disease (RHD) is a chronic and progressive form of damage to the heart valves resulting in dysfunction of the heart. It is a complication of an autoimmune disorder called acute rheumatic fever (ARF), which is in turn precipitated by group A streptococcal infections of the throat. 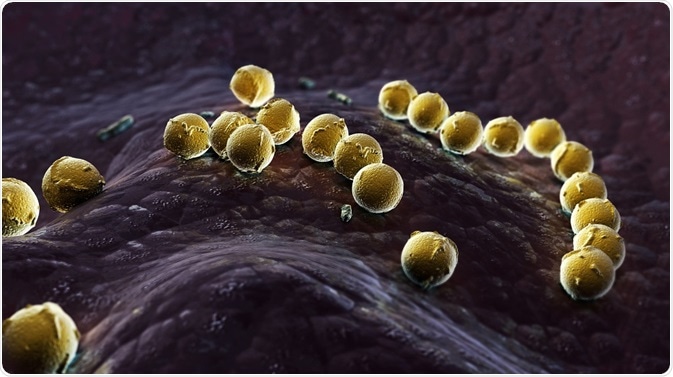 RHD follows ARF in 30-45% of cases. ARF involves all three layers of the heart, as a result of cytokines and other inflammatory molecules which are released to act against the streptococci, as well as attack by immune cells upon the cardiac tissues.

A subspecies of T lymphocytes called CD4+ T cells and macrophages are prominent in this attack, and other molecules such as VCAM-1 help these cells attach to the valves. A genetic susceptibility is necessary for RHD to occur.

The basic mechanism of RHD is called T-cell molecular mimicry. This means that antigens on group A streptococci stimulate the activation of CD4+ T cells which then cross-react with similar peptides in the heart tissue.

The antigen-T cell reaction of course leads to destruction of the tissue being attacked, which is in this case the heart valve endocardium. Other soluble molecules such as TNF-α, IL-1 and IL-2 are overproduced in ARF by monocytes in peripheral blood. These cytokines promote acute and long-term inflammatory responses which seem to continue as a chronic process even after the infective agent itself has died out.

The lesion, called the Aschoff nodule, is the characteristic feature of an RHD lesion, and consists of a clump of granuloma cells. It passes through different stages and contains a variety of immune cells. Their growth and progression is linked to the production of these cytokines, first by the monocytes in the acute phase and thereafter by T cells as the lesion becomes chronic.

The first step is a pharyngeal infection with Streptococcus pyogenes, followed by the presentation of antigens to the immune T and B cells. It is noteworthy that skin infections with the same strain of bacteria do not result in ARF.

Activation of CD4+ cells leads to the production of specific acute and chronic phase antibodies (IgM and IgG, respectively) by B lymphocytes.

These antibodies and activated T cells react with structurally similar proteins or peptides in heart tissue, which is called cross-reaction. As a result, the heart becomes inflamed. Joints develop swelling and pain due to the accumulation of immune complexes, formed by antigen-antibody combinations. Chorea and skin rashes or nodules are other manifestations of this immune activation, in the basal ganglia and the skin respectively.

The molecules which mimic each other may be a spiral protein in M protein and N-acetyl-beta-D-glucosamine antigens found in S. pyogenes, and myosin in the cardiac muscle. In other words, these molecules share some similar antigenic structures with myosin, the human muscle protein. The antibodies formed against these cross-react with tissue in the human heart valve as well.

The overexpression of VCAM-1 molecules causes CD4+ cells to stick to and burrow into the valve endothelium, activating a cellular immune response in the valve. This produces an inflammation of the valve tissue with the growth of new blood vessels.

This leads to further availability of T cells from the increased blood supply brought by these vessels. More and more spots of antigenic attraction may occur on the valve, on other proteins such as vimentin and tropomyosin, so that the T-cell attack extends to more areas. Granulomas (called Aschoff bodies) form underneath the endocardial (innermost) layer of the heart.

Calcification also occurs as part of this inflammation and is linked to the level of a chemical called osteopontin in the blood. Other markers of inflammation such as CRP and oxidation products of proteins are also raised in the blood of patients with RHD.

While this is the accepted mechanism of RHD, newer research is focusing on the endothelium covering the heart valves as the target of immunologic damage in this condition. Hopefully, this will shed light on the paradox of why only throat infection with group A streptococci causes ARF, and not skin infection with the same organism.