Human body hosts 10-100 trillion microbes (small microorganisms such as bacteria, viruses and fungi) and their groupings or community is referred to as microbiota. The complete collection of genes of all the microbes in a community is termed as microbiome. 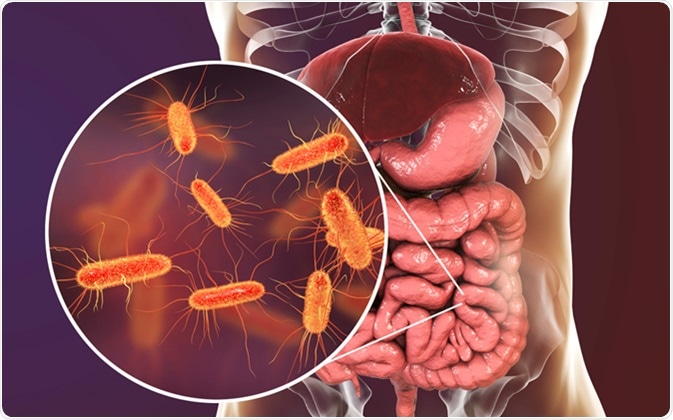 Microbes start inhabiting the human body soon after the birth. They colonize in the areas exposed directly to the environment such as human respiratory tract (most commonly the nose), the skin (especially lined with the mucous membrane such as groin), the urinary tract, and the digestive tract (mainly colon and the mouth).

Research suggests that when these microbes are disturbed from their natural environment, such as by excessive use of antibiotics, or the changes in the diet, or if new pathogens invade the body, this positive mutualistic relation becomes negative.

Colorectal cancer (CRC) is the third most common form of cancer. New technologies such as metagenome sequencing have made it possible to understand the relationship between the microbiome and colorectal cancer. Microbes inhabit different sites in the gut, including ascending colon, distal colon, proximal ileum, and jejunum; and they play a crucial role in maintaining its healthy functioning. This natural flora helps in the food digestion, vitamin biosynthesis, and protection from pathogens.

Dysbiosis is a condition when these microbes become imbalanced in the gut. Studies have indicated that imbalance in the community of gut microbes is associated with CRC development. Also, there is a scope of managing gut bacteria which can help in curing the CRC.

Some bacteria and their roles are as below:

Researchers have found that there is a difference in bacteria found in breasts of women with breast cancer and the ones without the disease. In case of endometrial cancer, similar results were observed which indicated that the microbes found in the vaginal environment of women with endometrial cancer were different from the microbes in the vaginal environment of healthy women.

Studies performed by the International Agency for Research on Cancer have indicated thatHelicobacter pylori has a carcinogenic nature. Certain risk factors such as use of tobacco, high body mass index, and altered pepsinogen levels, are associated with disturbing the microbial balance and thereby increasing the risk of gastric cancer.

Role of the Human Microbiome in Immunotherapy

Immunotherapy is becoming a modern tool in treating cancer, where the natural immunity is strengthened to combat cancer, and the role of microbiome is becoming a promising tool in aiding immunotherapy.

The type and variety of bacteria in the gut can have a major effect on the results of immunotherapy. Studies indicate that individuals who had a high ratio of beneficial bacteria were more likely to respond to these drugs compared to those who had less number of good and more number of harmful bacteria.

Research has also indicated that manipulating the microbes in the patients who are less responsive to immunotherapy has shown benefits. Once their microflora is regulated and replaced with healthy microbiota, the immune system becomes more responsive in recognizing the tumors. Also, diverse microflora has the ability to modify the overall response of immunotherapy drugs.