Scabies is a common parasitic infection caused by the mite Sarcoptes scabiei variety hominis, arthropod of the order Acarina. Its worldwide occurrence with epidemics during war, famine, and overcrowding is responsible for an estimated 300 million cases every year.

From the time of the Greeks and Romans through the Middle Ages, this disease was also known as the “itch”. Roman physician Celsus is credited with describing its characteristic features and designating the term “scabies”. In 1687, Italian physician Giovanni Cosimo Bonomo discovered the parasitic etiology of the disease, making scabies one of the first illnesses with a known cause.

In modern medical literature, scabies refers to the various skin lesions produced by female mites, their eggs and scybala (a medical term for hardened masses of feces) that are deposited in the epidermis, leading to delayed-type hypersensitivity reaction. Hallmarks of infestation include intense itching, papular rash, as well as emotional disturbance from the concept of arthropod infestation. 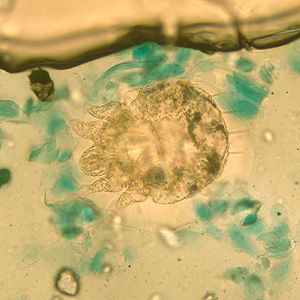 The scabies mite represents an obligate ectoparasite which has to live on the outside of a mammal host in order to survive. Although it is considered a single species (Sarcoptes scabiei), there are several physiological varieties or subspecies that are host specific.

The entire life cycle of the mite usually occurs in about 10 days for males and 14 days for females. After mating, the pregnant female crawls through the stratum corneum of the skin, tunneling her way with her strong mandibles. There she deposits two or three eggs (together with scybala) every day for several weeks.

These eggs hatch in approximately one week, and in about three weeks mature adults can be found. Adult mites have eight legs, which is a feature used to distinguish them from less mature larval forms that have six legs. The larval and nymph forms, as well as the males, live on the skin surface.

Transmission of the disease

Humans are the source of infestation, with transmission usually occurring after prolonged and close skin-to-skin contact. In crusted or Norwegian scabies (a rare, severe form of the disease) transmission may also occur via infected clothing or bedding.

Once they find a new host, the mites can start to burrow within minutes. Presently there is no published research on the minimum contact time required for the transfer of mites, hence any person in a direct contact with an individual who has scabies is considered at risk.

Scabies mites are able to survive and remain capable of infestation for approximately 24 to 36 hours at room conditions (at 21°C and 40%–80% relative humidity), but up to 19 days in a cool and humid environment. To identify a potential host, adult mites use odor and thermotaxis (i.e.movement in response to changes in temperature).

This skin infestation often occurs in the form of cyclic epidemics. Significant associations with poverty, poor personal hygiene, overpopulation and war-centric pandemics have been described. In fact, the disease is particularly rampant in overcrowded places without suitable sanitation such as nursing homes, schools and prisons.

Scabies has a world-wide distribution and affects all ages with no specific gender predisposition. Additional public health significance of the disease is recognized when large numbers of individuals are affected, for example in a nursing home. Outbreaks of scabies in such dimensions necessitate a special treatment strategy.