Britain Reports Case Of Male Contracting Monkey Pox
Source: Thailand Medical News  Dec 11, 2019  3 months ago
Monkeypox is a rare disease caused by monkeypox virus and has been reported mainly in central and west African countries. Monkeypox, in most cases, is a mild condition which will resolve on its own and have no long-term effects on a person’s health. Most people recover within a few weeks. 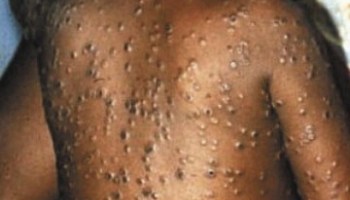 Symptoms usually include fever, headache, muscle aches, backache, swollen lymph nodes, chills and exhaustion. A rash can develop, often beginning on the face, then spreading to other parts of the body. The rash changes and goes through different stages before finally forming a scab, which later falls off.

The Public Health England (PHE) has confirmed a case of monkeypox in England. This is not the first instance of the virus being detected in the UK. Cases of monkeypox in the UK were reported back in September 2018. Risk to the general public in England remains very low.

Typically, monkeypox is a rare viral infection primarily reported in African countries. The spread of infection does not occur easily between people and the condition is usually self-limiting, but few individuals may experience severe illness.

The male patient is believed to have contracted monkeypox during a visit to Nigeria. The patient was a resident of south-west England before being shifted to the specialist high-consequence infectious disease centre at Guy’s and St Thomas’ NHS Foundation Trust, London for appropriate treatment.

Specialists from PHE are closely collaborating with their NHS colleagues for implementation of rapid infection control procedures, including contacting individuals who might have been in close contact with the infected person, including co-passengers in close proximity to the patient on the flight to the UK.

Consultant Microbiologist at Public Health England, Dr Meera Chand, told Thailand Medical News via a phone interview that "PHE and the NHS have well established and robust infection control procedures for dealing with cases of imported infectious disease and these will be strictly followed to minimise the risk of transmission."