Swiss Study Shows More Than 40 Percent of Cambodians Infected With Threadworms.
Source: Thailand Medical News  Jun 21, 2019  8 months ago
A study conducted by the Swiss Tropical and Public Medicine Health Institute showed that nearly 48.2 percent of Cambodians were infected with threadworms (stronglyloides stercoralis) and this could be an issue for Thailand as many Cambodian migrants are employed in the country, not only in the construction trade but also as domestic maids or in the food industry. 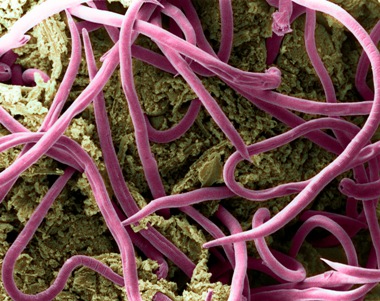 The threadworm infects humans through the skin, while the eggs of the threadworm can remain dormant in adverse conditions until they are transmitted into human via contamination through various forms and modes of transmission including ingestion and even breathing in these tiny particle like eggs.

Some of the early symptoms of threadworm infections include not being able to sleep properly, weight loss, loss of appetite and concentration issues. The worm can cause long-lasting and potentially fatal infections in people. The larvae are not detected by standard coprological diagnostics, so S. stercoralis has been under-detected and overlooked for years.

The researchers conducted a nation-wide parasitology survey of the Cambodian population and concluded that the problem is endemic in many tropical and subtropical areas and that more than a third of the studied population is infected with S. stercoralis. Previous surveys in individual provinces of Cambodia have found high prevalence rates of the infection.

The study showed that more  than 35.5% of participants were infected with threadworms. The rate in individual provinces ranged to as high as 48.2%. The risk of infection increased with age, and open defecation was associated with a higher risk while knowledge about helminth infections lowered a person's risk. In addition, S. stercoralis infection was positively associated with night temperatures, rainfall and distance to water, and negatively associated with land occupied by rice fields. "This study represents a clear risk map of S. stercoralis of a highly endemic setting," the researchers said in an interview with Thailand Medical News. "There is an urgent need to tackle this endemic and also neighbouring countries like Thailand should be on alert and take preventive measures in protecting its own populations.”

FROM THAI HERBS AND SUPPLEMENTS