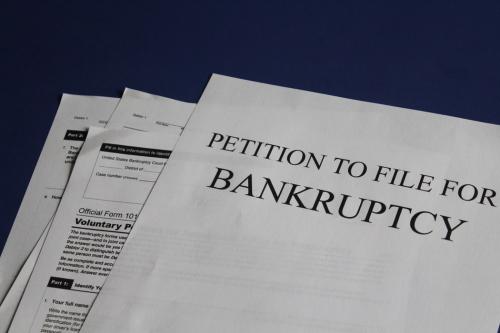 A pharma industry analyst identified 31 troubled biopharma companies that are at highest risk of going bankrupt in the next 12 months.

Typically rare in the drug industry, bankruptcy filings have ticked up in 2019, driven by growing legal, political and market pressures that could bring more companies to zero.

The metric rates thousands of companies, with a FRISK score of 1 representing the most financially vulnerable. CreditRiskMonitor incorporates risk indicators such as bond agency ratings, stock volatility, financial ratios as well as crowdsourced subscriber data.

The company says FRISK scores have been 96% accurate in predicting bankruptcy. Among drug companies that went bankrupt this year, the company had rated each one at a FRISK score of 1 or 2 beforehand.

The typical drug company has a FRISK score of 7. BioPharma Dive tailored the following list to include biopharmas traded on major U.S. exchanges with current share prices above $1 and market values above $50 million, resulting in a list of 31 companies.

Here’s some of the most notable names on the list and how they got here.

Teva pharma is the biggest company on the list and has struggled to chart a convincing path forward given rising legal liabilities and eroding revenues. The Israeli drugmaker finds itself at the center of several of the industry’s most prominent controversies.

Legally, Teva faces charges of helping to spur an opioid epidemic and of conspiring to fix prices with other generic drugmakers.

In December 2017, hundreds of opioid-related court cases were consolidated into a case proceeding in federal district court in Ohio, with Teva one of many industry players facing allegations. That led to a recent round of early settlements with two Ohio counties. Other companies on the high-risk list, including Mallinckrodt, Amneal and Endo also find themselves embroiled in opioid troubles.

And in May 2019, 44 state attorneys general named Teva in a suit claiming the firm worked to artificially raise drug prices in tandem with its generic drugmaker peers.

While its legal problems draw headlines, Wall Street analysts have also voiced concern about Teva’s high debt levels, which stood at nearly $27 billion as of the end of September.

The market has largely fled Teva, with its shares nosediving from about $70 apiece in 2015 to less than $10 recently. The company has struggled to grow revenue, as the U.S. market for generic drugs flatlined and its major branded drug, Copaxone, faces generic competition of its own.

The company could find relief in sensibly refinancing its debt, while continuing to pay it off with its free cash flow. In the third quarter, for instance, the drugmaker paid off about $1.6 billion in its debt. The pharma also needs to resolve the opioid litigation, one of the most significant legal threats facing the industry.

The business previously known as Valeant followed what some termed a 3 B’s strategy throughout the 2010s: Buy drugs, borrow money and boost prices.

For the first few years, Valeant was thriving with growth juiced by M&A, including acquiring Bausch & Lomb in 2013 and Salix Pharmaceuticals in 2015. The tremendous expansion reached its peak in 2015, when Valeant was Canada’s most valuable public company.

The business faltered in late2015 and 2016 amid controversies over its price-hiking strategy and use of specialty pharmacies to distribute drugs. Investigations by regulators and Congress soon followed, leading to the ouster of CEO J. Michael Pearson by the end of 2016.

At that point, the company had taken on more than $30 billion in total debt, a hole it still finds itself digging out from. The pharma spent much of 2017 reversing course on its M&A spree, selling off non-core businesses including skincare brands to L’Oreal for $1.3 billion, Dendreon Pharmaceuticals for $845 million and iNova Pharmaceuticals for $938 million.

This year, Bausch executives pitched investors on plans to grow revenue again and start unwinding its massive debt. At the end of September, Bausch has about $24 billion in total debt.

Bausch also faces wide-ranging legal threats, including multiple state investigations into its patient assistance programs, pricing strategies and former relationship with a mail order pharmacy at the center of its fall from Wall Street’s good graces. The SEC is investigating the company’s accounting practices and policies.

Both Moody’s and Fitch Ratings rate Bausch as a non-investment grade, speculative company.

“I am not an empire builder,” Clovis CEO Patrick Mahaffy declared at the start of 2019, publicly entertaining the notion of getting acquired at the J.P. Morgan Healthcare Conference. “I don’t have a dream of dying … at 107 years old with my Clovis hat on.”

That dream seems unlikely to be realized on Clovis’ current trajectory, as the biopharma’s one commercialized cancer drug has vastly underwhelmed.

In late 2016, Clovis won approval for the PARP inhibitor Rubraca and lofty initial sales expectations helped run up Clovis’ stock to nearly $100 per share the following summer. Since then, shares have plummeted as Rubraca sales disappointed. When Mahaffy opened up about seeking a sale, shares were trading at around $20.

Clovis has kept tumbling from there, though, and is on pace to close out the year trading at less than $6 per share. Its market value of about $320 million is less than the $354 million the company had in cash and equivalents at the end of September, suggesting investors aren’t trusting Mahaffy and his leadership team to deliver.

The longtime vaccine developer saw its shares tank this February after the biotech disclosed a Phase 3 study of its RSV vaccine ResVax failed.

The experimental vaccine is the Gaithersburg, Maryland-based company’s lead clinical candidate. While the trial failed to reach the primary endpoint, company executives emphasized other data that showed the vaccine could help prevent some of the consequences of RSV, or respiratory syncytial virus.

Even with the failure, Novavax has vowed to plow ahead. R&D head Greg Glenn told BioPharma Dive then that “the vaccine is not dead” and that he anticipated it moving forward in some fashion.

Novavax is one of many so-called zombie biotechs  businesses that have been able to survive for years or decades despite lacking commercialized medicines and suffering repeat clinical failures.

Since its founding in 1987, Novavax has accumulated a $1.4 billion deficit. Over the past three years, the company averaged more than $200 million in yearly net losses.

Since February’s Phase 3 readout, the stock has dropped about 90%. In May, the biotech performed a one-for-twenty reverse stock split to bolster its share price.

The company had $76 million in cash and equivalents at the end of September, and has posted a net loss of $101 million through the first nine months of 2019.

Note: The number in the brackets refers to the frisk score.