Biotech researchers at Scripps Research in Jupiter, Florida have developed a special molecular switch that could be embedded into gene therapies to allow doctors to control dosing.

The biotech feat, reported in the scientific journal Nature Biotechnology, offers gene therapy designers what may be the first viable technique for adjusting the activity levels of their therapeutic genes. The lack of such a basic safety feature has helped limit the development of gene therapy, which otherwise holds promise for addressing genetically based conditions. The scientists' technique appears to solve a major safety issue and may lead to more use of the strategy. 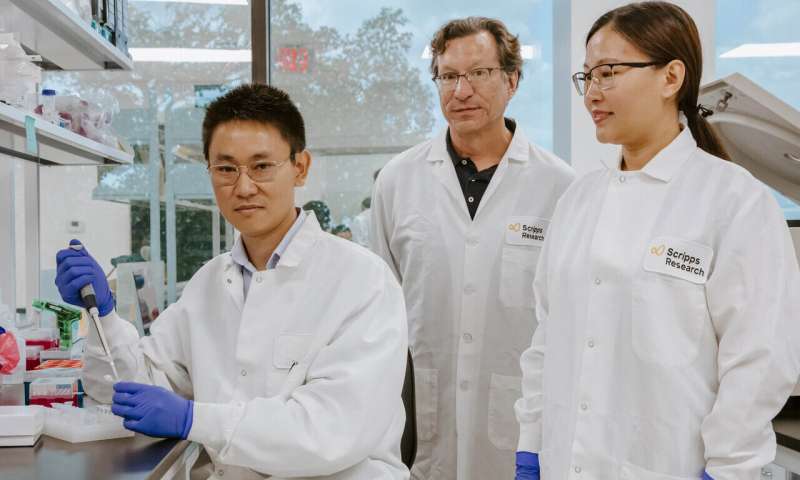 The biotech research team at Scripps, led by principal investigator Dr Michael Farzan, Ph.D., demonstrated the power of their new switching technique by incorporating it into a gene therapy that produces the hormone erythropoietin, used as a treatment for anemia. They showed that they could suppress expression of its gene to very low levels with a special embedded molecule, and could then increase the gene's expression, over a wide dynamic range, using injected control molecules called morpholinos that the U.S. Food and Drug Administration has found to be safe for other applications.

Dr Farzan told Thailand Medical News, I think that our approach offers the only practical way at present to regulate the dose of a gene therapy in an animal or a human."

Typically, gene therapies work by inserting copies of a therapeutic gene into the cells of a patient, if, for example, the patient was born without functional copies of the needed gene. The strategy has long been seen as having enormous potential to cure diseases caused by defective genes. It also could enable the steady, long-term delivery to patients of therapeutic molecules that are impractical to deliver in pills or injections because they don't survive for long in the body. However, gene therapies have been viewed as inherently risky because once they are delivered to a patient's cells, they cannot be switched off or modulated. As a result, only a handful of gene therapies have been FDA-approved to date.

The efficiency yet simplicity of the technique, and the fact that morpholinos are already FDA-approved, could allow the new transgene switching system to be used in a wide variety of envisioned gene therapies, Farzan adds.

Dr Farzan's team, including study co-first authors Dr Guocai Zhong, Ph.D. and Dr Haimin Wang, respectively a postdoctoral researcher and a research assistant in the Farzan lab, crafted a transgene switch from a family of ribonucleic acid (RNA) molecules called hammerhead ribozymes. These ribozymes have the remarkable property that they cut themselves in two as soon as they are copied out into RNA from the DNA that encodes them.

Normally, a therapeutic transgene containing the DNA of such a ribozyme will thus be copied out in cells into strands of RNA, called transcripts, that will tend to separate into two pieces before they can be translated into proteins. However, this self-cleaving action of the ribozyme can be blocked by RNA-like morpholinos that latch onto the ribozyme's active site; if this happens, the transgene transcript will remain intact and will be more likely to be translated into the therapeutic protein.

The biotech scientists started with a hammerhead ribozyme called N107 that had been used as an RNA switch in prior studies, but they found that the difference in production of a transgene-encoded test protein between the "off" and "on" state was too modest for this ribozyme to be useful in gene therapies. However, over months of experimentation they were able to modify the ribozyme until it had a dynamic range that was dozens of times wider.

The research team then demonstrated the ribozyme-based switch in a mouse model of an EPO gene therapy, which isn't yet FDA-approved but is considered potentially better than current methods for treating anemia associated with severe kidney disease. They injected an EPO transgene into muscle tissue in live mice, and showed that the embedded ribozyme suppressed EPO production to a very low level.

It was observed that injection of a small dose of the morpholino molecules into affected tissue strongly reversed that suppression, allowing EPO production to rise by a factor of more than 200 and stay there for more than a week, compared to a half-life of a few hours for EPO delivered by a standard injection. Those properties make the ribozyme-based switch potentially suitable for real clinical applications.

Dr Farzan added,"We got what I would have said before was an impossible range of in vivo regulation from this system,"

Dr Farzan and his colleagues are now working to adapt their ribozyme switch technique so that it can be used as a gene therapy failsafe mechanism, deactivating errant transgenes permanently.