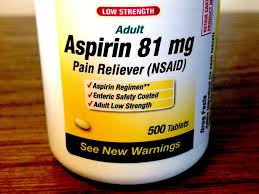 "We're talking about healthy people who don't have known heart disease or stroke, who might have been considering or already taking an aspirin as a blood thinner to prevent that heart attack or stroke " said Dr. Erin Michos, one of the writers of new prevention guidelines developed by the American Heart Association and American College of Cardiology in an exclusive interview with Thailand Medical News.

It is ok for individuals who already have had a stroke or heart attack, or who have undergone bypass surgery or a procedure to insert a stent in their coronary arteries as long as its prescribed by their doctors and are also under constant monitoring.

Asprin has been associated with internal bleeding and new studies have also confirmed that  aspirin has no obvious benefit for healthy people older than 70 but found evidence for harm, which is why the new prevention guidelines strongly discourage aspirin as a protective therapy among these older adults.

But it’s a new study that was conducted in Taiwan’s Chang Gung University College of Medicine lead by Dr.Meng Lee that is bringing very troubling warnings about the risk of brain bleeds associated with low dose aspirin in healthy individuals.

For the study, the team scanned over and analyzed data from the results from 13 clinical trials testing low-dose aspirin in adults with no history of heart problems or stroke. On average, aspirin raised the risk of bleeding in or around the brain by 37%, the findings showed.

But whats even worst was that data showed people of Asian ethnicity was at a higher  risk of brain bleeding as those studies saw their risk rise by 84%.

It's not clear why, according to Lee , but other studies have found the same pattern.

Previous studies did suggest that the bleeding risks with aspirin were generally outweighed by its ability to curb the odds of a first-time heart attack and stroke. But things have changed these days as people are smoking less and there have been improvements in controlling high blood pressure and cholesterol. That means for lower-risk people, the heart benefit of aspirin has diminished -- making the bleeding risk more of a concern.

Doctors should consider advising aspirin for individuals who have a strong family history of heart disease, or if tests like coronary calcium scans detect considerable plaque buildup inside their arteries.

But for most people considered to be at low or moderate risk, they can better protect themselves with healthier habits, such as eating  a heart-healthy diet, getting regular physical activity, controlling  blood pressure and controlling cholesterol. Statin might be more important than aspirin for people needing to control their cholesterol for preventive cardiovascular issues.

Note: All patients are advised to consult their doctors and not to self prescribed and take aspirin or statins by themselves nor are they to stop any doctor prescribed medications without conuslting their doctors first.