Spots erupting on the face or, less commonly, on other parts of the body, are medically called acne vulgaris, or just acne. Acne is a physiological disorder of the pilosebaceous units of the skin. These units consist of a hair follicle and a sebaceous gland and are most numerous over the face, the chest, and the upper back. These are therefore the sites of acne in most patients.

The gland produces an oily secretion called sebum. Under the influence of puberty hormones such as testosterone and estrogen, the sebaceous glands become hyperactive, to produce more sebum with altered characteristics.

The sebaceous glands are those which are found attached to hair follicles on a 1:1 ratio. These are the places where hair is formed and emerges on to the skin through tiny orifices. The oily sebum carries out dead cells to the skin surface where they can be discarded. When these orifices become blocked by hair, oil and secretions, sebum piles up behind them, causing spots to appear.

The bacterium called Propionobacterium acnes, which is a skin colonist found on normal skin, starts to grow inside the plug of oil and dead keratinocytes releasing more inflammatory chemicals. In this way the accumulated sebum forms a small bump under the skin. It may become inflamed, forming a red swollen pimple. Some pimples are closed, or covered by skin, while others are open to the outside. In the latter case, the exposed sebum may be oxidized and become black, forming a blackhead.

Causes of acne may vary from hereditary predisposition or hormonal changes to certain medications. People who are on oral contraceptives (birth control pills), or become pregnant, may become prone to pimples at certain periods, especially when the hormone levels are fluctuating.

All those who have acne do not show the same type of lesion.

The primary lesion in acne is the comedo, which is a closed up hair follicle which has swollen up.

Blackheads and whiteheads are capable of remaining in the skin for a long time. Once the follicular wall breaks down, as happens with time, a pimple forms. 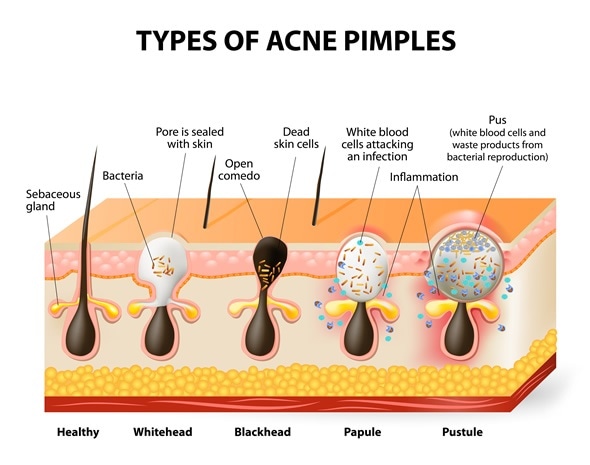 Acne is a continuing skin disorder which persists for months or years, unlike the occasional pimple. It may be classified as mild, moderate, or severe acne.

Acne both arises and remains for a long time, sometimes leaving scarring or small red marks behind. In contrast, ‘normal’ pimples usually occur and clear up soon afterwards.