Fingernails are mirrors of health and disease. They show several kinds of change, such as splinter hemorrhages or clubbing, which relate to specific illnesses. However, Beau’s lines are non-specific deep transverse linear depressions or trenches across the nails which occur in situations such as: 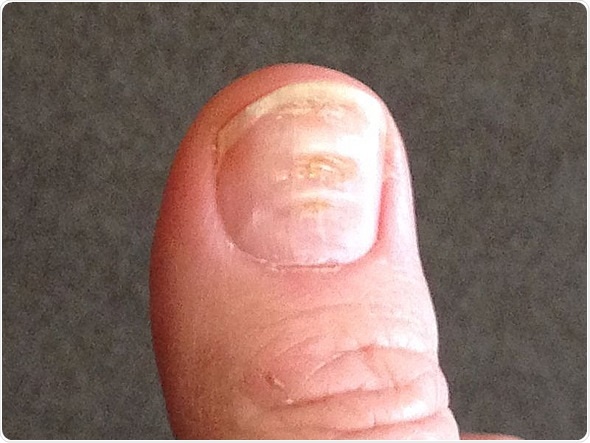 These lines were first described in 1846. They are characteristically seen at the same part of the nail plate, in most or all of the nails. It is possible to identify which disease process caused these lines by measuring how far away they are from the nail bed, because nails grow at a rate of approximately 1 mm every 6-10 days. They are the most common nail change in systemic disease, as well as the least specific.

In rare cases, Beau’s lines are inherited or idiopathic.

Single transverse grooves represent an episode of severe stress or illness, while a series of lines show recurrent episodes. If the nail stops growing for at least 7 weeks, the line becomes very deep, and this is called onychomadesis. The width of the line shows the duration of the disease. A sudden attack of disease results in a Beau’s line with a steep distal end, but a more insidious onset is suggested by a sloping distal margin.

When Beau’s lines are seen on all the fingernails, the person may have a history of illnesses such as:

The nail is correctly called the nail plate, and is made up of keratin. It covers the dorsal part of the end of the last phalangeal bone, and protects the skin from trauma. It is essentially composed of tightly-packed dead skin cells, and is produced by the nail matrix, which is the living and growing layer of the nail, at the part of the nail bed that is closest to the finger.

Growth of the nail produces more and more keratin. The distal part of the matrix gives rise to the deeper nail layers. Problems with the distal matrix will thus cause ridging or splitting of the nails due to the disturbance of the deeper layers. On the other hand, the proximal nail matrix generates the superficial nail layers. It is affected by conditions such as psoriasis, which produces characteristic pitting of the nail.

Transient problems with nail growth will produce temporary disturbances with nail growth. This includes the transverse band-shaped indentations that are called Beau’s lines. Thus any systemic illness that is severe enough to interfere with normal cell division will lead to a cessation of the normal growth of the nails for a period. This is sufficient to produce these lesions. The grooves themselves only become noticeable after several weeks when the nails have grown enough for the depressed areas to be seen clearly.

Treatment of Beau’s lines depends upon identifying the underlying condition and correcting it. The lines themselves grow out and eventually disappear.