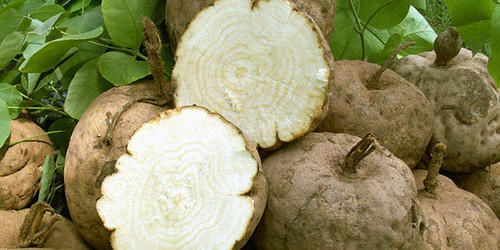 
One of the main phytochemicals found in Pueraria mirifica is a type of chemical that mimics the hormone estrogen. Known as phytoestrogens, they are abundant in the plant and its herbal supplements are usually used to treat symptoms of menopause due to the strong estrogenic effects.


Due to menopause, the level of estrogen decreases in the body leading to uncomfortable symptoms. Taking Pueraria mirifica supplements shows improvements in menopausal stage symptoms such as hot flashes, vaginal dryness, irritability, irregular or absent periods.


Pueraria mirifica may be an effective topical therapy for promoting the health of vaginal tissue and treating vaginal dryness.


When compared to estrogen creams, Kwao Krua creams tend to stand out as being more effective in treating conditions such as vaginal dryness and vaginal irritation.

It has also been known to be good for women after childbirth and also for women having frequent sex in terms of helping the vaginal tissues repair and heal.


Insufficient estrogen can lead to bone loss especially in menopausal or post-menopausal women and supplementing with Pueraria mirifica has shown to improve bone density and also prevent osteoporosis.


Antioxidants are chemical compounds that reduce levels of stress and oxidative damage within your body, which may otherwise cause disease.


Some test-tube research suggests that Pueraria mirifica may have antioxidant properties and that it also enhances the function of other antioxidants present in the body.


Another possible health benefit of Pueraria mirifica is its potential to slow the growth of cancerous cells and tumors.


Some test-tube studies suggest that the plant and its phytoestrogen compounds may inhibit the growth of several breast cancer cells. A phytochemical called miroestrol  found in the plant was found to have cancer protective effects in mouse trials.


Pueraria mirifica may also benefit your heart health, especially since heart health may be affected by decreased estrogen levels during and after menopause.


Estrogen is involved in the metabolism of fats and sugars within your body. Reduced estrogen levels can negatively influence factors that affect your heart health, such as higher cholesterol, increased inflammation, and weight gain


Studies show that estrogenic compounds present in Kwao Krua may protect against the damage to the brain and nervous system that may occur as a result of decreased estrogen levels.


Miroestrol found in the plant has shown significant reduction in mental decline and oxidative stress within the brain tissue in individuals consuming it.


Recommended Dosage and Side Effects


Most research has shown that doses of 25–100 mg seem safe with no apparent adverse reactions reported.


There has been  very few negative side effects documented with Pueraria mirafica supplements compared with so much medical news announcing its merits. But that does not mean that taking the supplement is risk-free.


Pueraria mirifica is often marketed as a “safer” alternative to conventional hormone and estrogen replacement therapies, which are known to come with serious side effects, including increased risk of cancer, blood clots, heart attacks, and stroke