Schistosomiasis, also known as bilharzia, snail fever or Katayama fever, is an infectious disease caused by parasitic worms of the genus Schistosoma. It can affect either the urinary tract or the intestinal tract, depending on the species.

Schistosomiasis is the third most prevalent parasitic disease and has the second largest impact on humans of all tropical diseases, after malaria.

Throughout the world, more than 207 million people are affected, with a further 700 million at risk as they live in endemic regions. More than 80% of cases occur in sub-Saharan Africa, although it is also a major health issue in other areas such as Egypt and China. Poor and rural communities are the most affected and the greatest prevalence is observed among young adolescents.

The mortality rate of the condition is 14,000 deaths per 200 million cases per year. This is relatively low, considering the number of potentially severe complication associated with schistosomiasis.

There are several different species of Schistosoma that may cause the infection, including:

Infection with parasitic worms of the genus Schistosoma is responsible for causing the condition.

Transmission of the parasites occurs when the skin of humans comes into contact with freshwater that is infested with larva that penetrate the skin. The larvae develop into adult schistosomes in the body reside in the blood vessels. The female worms lay eggs, which are excreted from the body in the feces or urine. The eggs can then hatch in fresh water, with the aid of fresh-water snails, to continue the life cycle of the parasitic infection. 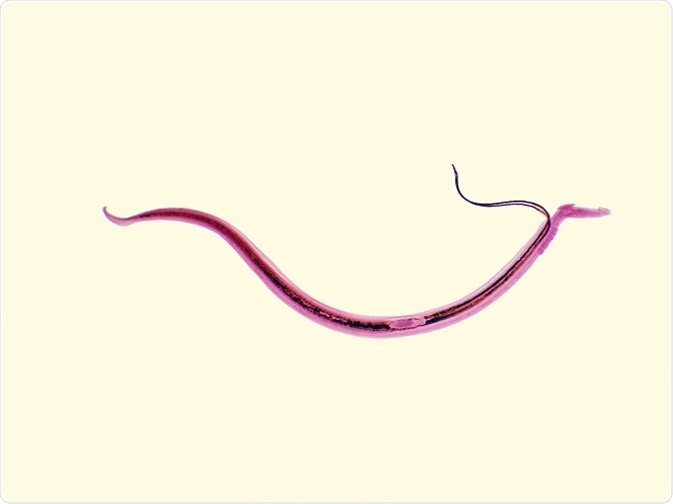 Some of the eggs are not excreted from the body easily and become trapped in the gastrointestinal or urinary tissues. This can cause significant immune reactions and eventual damage to the organs involved.

Patients may experience symptoms as a result of a reaction to the worms’ eggs.

Intestinal schistosomiasis is associated with symptoms of abdominal pain, diarrhea and bloody stools. If the infection continues on a chronic basis, it is common for the liver to become enlarged and an accumulation of fluid in the peritoneal cavity may occur.

Urogenital schistosmiasis is characterized by haematuria. In chronic infections, damage to the urinary system can occur, such as fibrosis of the bladder and ureter, as well as kidney damage that may lead to kidney failure. Infertility and other sexual problems present in some cases and a rare complication is bladder cancer.

Children with schistosomiasis may exhibit signs of delayed growth and learning difficulties, as a result of the condition.

Medications such as praziquantel are used to treat people with the infection at regular periods to prevent the continuation of the infection. Children and adults in endemic areas should be treated to help prevent infection outbreaks. The treatment is often repeated annually for several successive years in high-risk areas.