Fifth disease is a viral skin infection caused by parvovirus B19. Fifth disease (also known as erythema infectiosum) is a common skin infection in children. It gets its name as it was fifth in the list of historical classifications of common skin rashes in children. Children usually start showing the symptoms within 4 – 14 days after getting infected by parvovirus B19. This disease is highly contagious and can spread rapidly from one person to another through saliva, sputum, and nasal mucus, when the infected person coughs or sneezes.

Fifth disease is mainly contagious at its early stage when the infected person only shows symptoms of a fever and/or a cold, and rashes have not developed yet. However, the person is not very likely to be contagious once rashes start appearing. The disease can also spread through blood, and an infected pregnant woman can easily transmit the virus to her offspring. 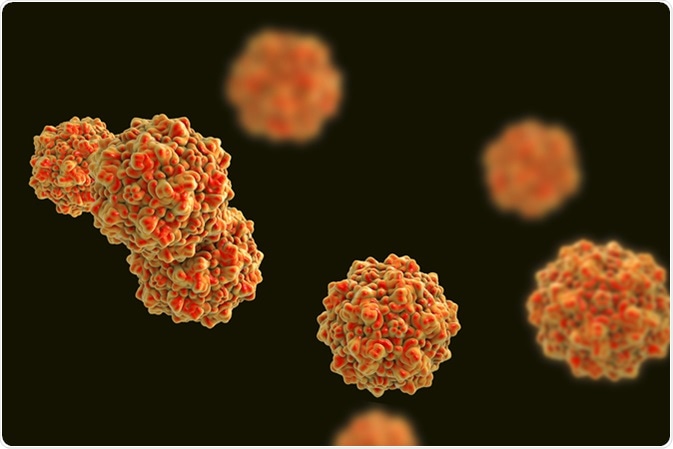 In most cases, the symptoms of fifth disease are mild, which include fever, running nose, headache, and rash. The most distinctive sign of the disease is the development of red rashes on the face, which is commonly referred to as ‘slapped cheek’ rash. However, after a few days itchy rashes can develop on the chest, back, buttock, arms, or legs. Another symptom commonly shown is painful swelling of the joints, which is more common in adult women.

Fifth disease symptoms are generally mild for healthy children and adults and usually go away with time, without creating any complication. However, in some cases, it can cause serious health complications. A person is more susceptible to fifth disease if they have chronic anemia or a weak immune system due to cancer, organ transplant, or HIV infection. Anemic people are at the highest risk, as parvovirus B19 can transiently reduce or stop the production of red blood cells in the body.

Another risk factor for fifth disease is pregnancy. In most of the cases, pregnant women are immune to parvovirus B19 and, therefore, protected from getting the infection as well as transferring it to their offspring. Even if the woman is not immune, she can only get a mild infection after being exposed to the virus, therefore an infant of the infected mother usually is not at risk. However, in some very rare cases, which are less than 5%, an infant may develop severe anemia due to the mother’s illness, which can lead to miscarriages during the first half of a pregnancy.

Healthcare professionals usually diagnose the disease by observing the characteristic ‘slapped cheek’ rashes on the face. In case of absence of this symptom, a blood test can be performed to detect the presence of parvovirus B19.

In most cases, fifth disease is mild, and infected people gradually recover without any medication. Healthcare professionals sometimes recommend medicines to relieve symptoms such as fever, cold, headache, itching, and joint pain and swelling.

No vaccine or medicine is available to prevent fifth disease. Once infected, a person develops immunity against parvovirus B19 for the rest of their life. Since infected people are mostly contagious at the initial stage of infection (before rashes appear), it is a bit difficult to take any preventive measures to stop the disease from spreading.

Once the disease is diagnosed, or at least suspected, measures that can be taken to reduce the chance of spreading the virus include washing hands frequently with soap and water, covering the mouth and nose while coughing or sneezing, avoid touching the nose, eyes, and mouth, avoiding close contact with infected people, avoid sharing foods or drinks, and avoid going out in crowded public places.

Healthcare providers, especially ones that are pregnant, should be well aware of the potential risk factors associated with the disease and should strictly follow the infection control practices.