Dopamine is a cathecholamine. This means it has a Cathechol nucleus and is a precursor to norepinephrine (noradrenaline) and then epinephrine (adrenaline) in the biosynthetic pathways for these neurotransmitters.

Dopamine is a derivative of the amino acid tyrosine. Tyrosine is modified by tyrosine hydroxylase to form DOPA. This is a very important step in the formation of Dopamine and is called the rate limiting step.

DOPA decarboxylase then removes carbon dioxide from DOPA to for dopamine (C8H11NO2). Dopamine then serves as a precursor to norepinephrine and epinephrine.

Once the cathecholamines like Dopamine, Norepinephrine and Epinephrine are formed they are packaged in granulated vesicles to be transmitted across the synapse in response to a stimuli.

Termination of action of dopamine

The action of dopamine is terminated by two methods: 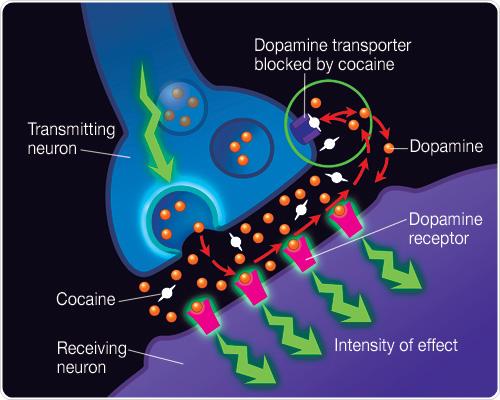