Each kidney is made up of approximately one million glomeruli. These filter nitrogenous wastes (like urea and creatinine) from the blood, passing through the tuft of capillaries that make up a glomerulus, along with excess water. This water passes into a collecting tubule and eventually becomes urine.

Damage to the glomeruli results in the escape of substances like protein, excessive amounts of electrolytes, and even red or white blood cells into the urinary fluid. As the damage progresses, glomerular function is lost. This impairs the excretion of harmful toxic wastes, leading to their buildup in the body. 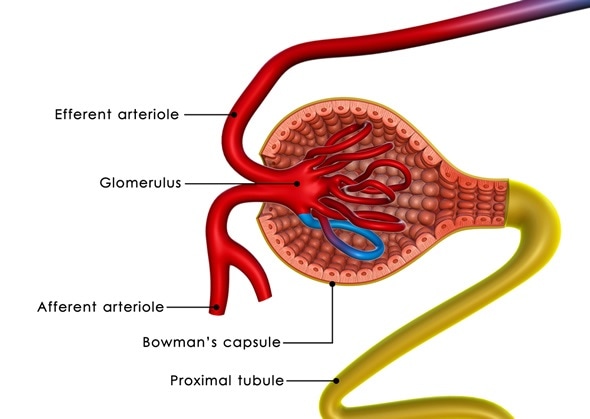 The loss of protein, such as albumin, results in a lower osmotic pull with respect to the fluid in the blood. Thus, fluid tends to seep out of the blood into neighboring tissue and results in swelling. This is more obvious in parts of the body which are affected by gravity, such as around the ankles. After a period of sleep, fluid may also collect in the loose tissue around the eyes, leading to a puffy appearance.

The symptoms of glomerular disease include:

The signs which might be picked up on urine and blood testing include:

Causes of glomerular disease may range from nephrotoxic drugs, diseases like diabetes mellitus, or infections such as streptococcal infections. These tend to cause an autoimmune inflammation of the glomeruli and subsequent impairment.

Primary autoimmune conditions such as systemic lupus erythematosus or IgA nephropathy may also cause glomerular damage and destruction; however, diabetic nephropathy is currently the leading cause of glomerular disease in the United States.

Glomerular disease may cause acute renal failure which requires immediate dialysis and treatment of the underlying cause. In most cases, the patient recovers well but is at a higher risk of developing chronic renal disease later.

In other patients, glomerular disease results in chronic kidney disease, which cannot be cured but can be controlled. In most of these cases it ends in kidney failure.

Glomerular disease may lead to total loss of kidney function, either rapidly or, more commonly, in a slowly progressive fashion over many years. The result is end-stage renal disease which requires renal replacement therapy, or a kidney transplant.

Specific tests will look at:

In case these results arouse suspicion, an imaging test, such as an ultrasound or an X-ray scan, may be advised. This will assess the kidney shape, size, and the presence of any structural abnormality such as kidney deformity or stones.