Norwegian or crusted scabies is a parasitic, infectious disease which obtained its name when it was first referenced in mid-19th century in Norway. The condition can, however, be found anywhere in the world.

It is a much more extreme version of scabies. There are usually around 5 to 15 mites on the body in the case of common scabies but in this complication of the disease there can be thousands and sometimes millions of mites. The female mites burrow into the skin of the patient and can lay up to three eggs each day for her lifetime. It can take up to 14 days for a fully grown mite to develop. 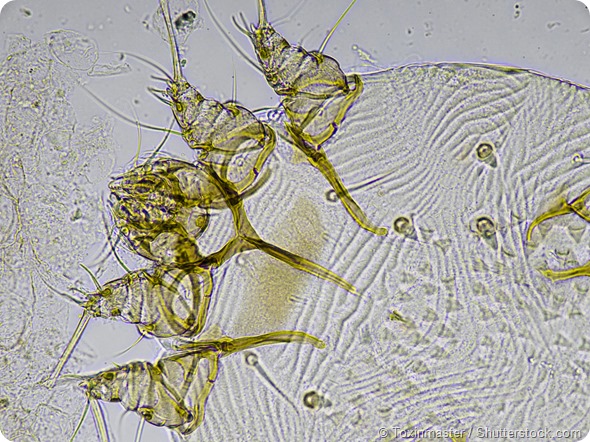 The disease creates blisters and sores in one or more places on the body due to mites. The skin becomes crusted with grayish colored flakes which can disintegrate when touched. The skin beneath the crusts is red raw as well. However, in comparison to the more common form of scabies, it does not tend to cause itching.

Sometimes the disease can be mistaken for other skin conditions such as eczema and psoriasis which can look similar. The sooner the disease is identified and treated, the faster the risk of spreading the highly infectious condition is minimized. Further tests such as a skin biopsy can help to provide a conclusive diagnosis. The skin can also be examined carefully to see if there is any evidence of a burrowing mite.

The condition can affect any part of the body. For example, patients can develop it on their nails, scalp, and neck. Areas that it can particularly cover include finger webs, elbows, wrists, scrotum, and breasts. Sometimes the condition can completely cover the patient’s body.

Who gets Norwegian scabies?

People whose immune system is very compromised can develop Norwegian scabies. Patients who are already suffering from scabies have also been known to develop this more severe version. Those who are most prone to the condition include:

The condition is also very contagious, so people who develop it may have caught it from someone else or they can pass it on to other people themselves. To minimize the chances of this happening, the patient should not share clothes, bedding or other personal items with other people. Areas where the patient has been should also be carefully vacuumed to minimize traces of the disease. In general, it is essential for the patient to receive treatment as soon as possible for the condition to reduce the risk of spreading it.

The disease can lead to other, more life-threatening situations. The patient with the disease already has a compromised immune system. The tendency of the skin to flake off easily puts them at risk of also catching a bacterial disease such as staphylococcal, streptococcal, cellulitis or impetigo.

Patients can undergo treatment with special chemical insecticides called scabicides. These can take the form of creams which are applied to the body. The patient may also need to take some antibiotics. As crusted scabies can be difficult to heal, the process may need to be repeated to shake the condition off.

Patients can be treated with keratolytic agents to help remove the affected skin. The medication permethrin has been used over a period of six weeks to treat people with Norwegian scabies. Ivermectin is another possible treatment. There has, however, been a reported resistance to latter at times.