The immune system is responsible for combating infection. This protective reaction of the body to an infection can sometimes be exaggerated beyond what is required. In such cases the overwhelming response of the immune system can become harmful to both the infected cells and healthy ones.

When the body releases chemicals during the immune response, this can cause blood clots, leaky blood vessels, poor flow of oxygenated blood and eventually cause damage to the tissues and organs. This condition is known as sepsis. 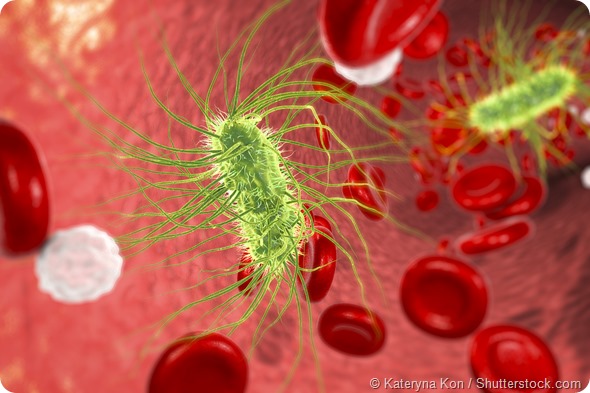 A 3D illustration of Escherichia coli bacteria in blood – a bacteria that can cause neonatal sepsis.

While anyone can develop sepsis, it is usually seen in senior citizens with a weak immune system. However young babies less than 90 days old may also suffer from this blood infection. When the disease onset begins in the first week after birth and before the third month of age, it is known as neonatal sepsis.

Neonatal sepsis is often triggered by a bacterial infection. The strains of Group B streptococcus, Escherichia coli, Neisseria meingitidis, Salmonella, Haemophilus influenzae type b, and Listeria monocytogenes are usually the cause of sepsis in babies. The infection is passed on to the baby from the mother either while she is pregnant or during the delivery process.

Factors that may increase the chances of neonatal sepsis include a preterm delivery, streptococcus colonization in the mother, water breaking more than 18 hours before the baby is born, and a possible infection of the placenta or amniotic fluid which is referred to as chorioamnionitis.

In addition to bacterial infections, neonatal sepsis may be caused by the Herpes Simplex Virus (HSV). The likelihood of the viral infection increases if there is a prolonged stay at the hospital after birth. This is even more true if the baby requires any additional procedures which involve placing a catheter in a blood vessel.

Symptoms and diagnosis of neonatal sepsis

In babies suffering from this blood condition there may be trouble breathing, a rise in body temperature, shivering, diarrhoea or constipation, low blood sugar levels, abnormal heart rate, lethargic movements, decreased suckling, a tendency to vomit, and a swollen stomach.

Since the baby may have just a couple of these symptoms initially, a few diagnostic tests are suggested. A blood culture, a complete blood count and a C-reactive protein test would be an easy way to confirm neonatal sepsis.

Should sepsis be suspected and the baby is showing a number of the symptoms, a spinal tap or lumbar puncture may be done. This test is used to take a sample of the spinal fluid and test it for bacterial infection of the brain.

If the mother has been unwell prior to delivery, blood, urine and stool cultures may be done to check for the herpes virus. Doctors may also recommend getting an X-ray of the chest done if breathing problems and coughing persists in the baby.

Treating and prognosis of neonatal sepsis

The newborn who exhibits symptoms of sepsis will need to be diagnosed as soon as possible so that treatment can commence. If left unchecked, neonatal sepsis can be fatal, therefore it is imperative that the baby be treated properly for the condition.

Depending on the type of primary infection, the baby may require a course of antibiotics or antiviral medication. Those found to be at a higher risk or whose mothers may have suffered from chorioamnionitis may also have an intravenous fluid to flush out the infection.

Babies who have been discharged from the hospital post-birth but develop neonatal sepsis may be readmitted to the hospital for constant care and monitoring of vital signs. The duration of the hospital stay will depend on how fast the infection in the blood resolves.

The prognosis for babies with bacterial infections is quite good. Most newborns will recover quickly from the infection as soon as proper medication begins. Viral infections can be somewhat trickier, however the chance of a complete recover without residual issues is good as long as the underlying infection is treated.

Since the infection travels from the mother to the baby in majority of the cases, it is advisable for pregnant women to take a course of antibiotics. This preventive measure works well in case of Group B streptococcus colonization, chorioamnionitis, E. coli infections and other bacterial infections.

The infection can also occur at the actual time of birth and so the birthing station should be properly sterilized to reduce the risk to the baby. Ensuring immunization of the baby through vaccinations against relevant viruses and bacteria also helps. Taking these basic precautions will help the baby avoid neonatal sepsis.