Rosacea is a chronic inflammation of the eyes and the central part of the face. Though it is a benign disorder, it can cause annoying self-consciousness and reduced enjoyment of life. It is among the top 5 most common skin diseases.

The most common phases are flushing and erythrosis or reddening of the face, while the formation of papules and pustules, with phymata, occur in only a few patients. 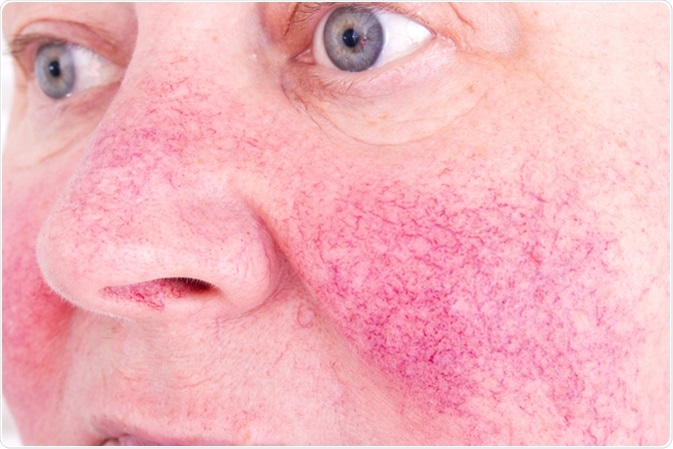 The medical condition that presents with an abnormally high concentration of bacteria in the jejunal aspirate on culture is known as small intestinal bacterial overgrowth (SIBO).

Many risk factors have been suspected, including hypochlorhydria, dysmotility, anatomic anomalies of the intestine, and immunologic causes. It has also been reported in association with connective tissue disorders and fibromyalgia, as well as non-alcoholic steatohepatitis.

Rosacea patients have a higher prevalence of SIBO than the general population, and when the bacterial overgrowth is eradicated with antibiotics, the resolution of skin lesions is almost 100% and persists for 9 months or more in about 8 out of every 10 patients.

A cross-over study showed the same effect when unresponsive patients on placebo were switched to the antibiotic arm of the study. The only patients in whom the rosacea relapsed were found to have persistent SIBO, and appropriate treatment of this led to healing of rosacea lesions in them as well.

Many patients with rosacea have symptoms relating to the gut, such as dyspepsia, bloating, flatulence, abdominal pain of a cramping nature, altered bowel habits such as alternating constipation and diarrhea, and meteorism.

In many cases, rosacea patients have been diagnosed with disorders such as ulcerative colitis, Crohn’s disease, celiac disease, gastritis due to H. pylori overgrowth, lipase deficiencies, hypochlorhydria, and diseases affecting the small intestinal mucosa.

Individuals with rosacea who are treated with antibiotics such as tetracycline or macrolide drugs, metronidazole, or chloramphenicol, show a good response to symptoms, even though the drugs have diverse mechanisms and spectrum of action.

Drugs that increase gut motility have also been known to improve rosacea symptoms, lending weight to the hypothesis that bacterial products are responsible for the development of the skin lesions, and this might also explain the improvement seen with antibiotics.

Such research points to the etiopathogenetic role of bacteria and their products in rosacea, but the pathway is far from clear. However, some clues exist, in the form of the hypersensitivity present in fibromyalgia, which is known to be the effect of endotoxins released as bacterial metabolites, or inflammatory mediators such as tumor necrosis factor-alpha (TNF-α), or due to bacterial translocation. This has led some to hypothesize that the lesions of rosacea are due to increased intestinal permeability in those patients who also have SIBO. This may lead to translocation or proinflammatory cytokine release, resulting in skin inflammation.

The remission of rosacea achieved with systemic antibiotics could be due to their effect on SIBO, but could also have other mechanisms such as preventing skin colonization by bacteria. This is called into doubt by the high effectiveness of drugs such as Rifaximin in rosacea, despite its mostly local action within the gut, poor systemic absorption and therefore presumed link between intestinal eradication of microflora and resolution of cutaneous lesions.

In addition, patients with rosacea, but without evidence of SIBO failed to improve with rifaximin therapy. For all these reasons, small intestinal bacterial eradication is likely to be the evidence of action in rosacea resolution with rifaximin.

Patients with rosacea also have a higher incidence of hyperglycemia, which means increased risk of SIBO due to gut hypomotility. Again, the flushing and erythrosis seen in many rosacea patients could be due to the release of angiogenic and vasoactive agents including nitric oxide or TNF-α. The fact is that papulopustular rosacea and erythrotic rosacea could be due to different causes.