Fluoride is a mineral commonly found in natural water sources and sea food. It is considered an important nutrient for the healthy functioning of various organs such as teeth, bones, and the brain.

The presence of fluoride in water largely depends on the geology of a given area, as fluoride leaches out from the rocks and the soil to reach the water bodies. Therefore, fluorosis (the condition characterized by marked mottling of the enamel of teeth) is mainly limited to certain geographic areas where the water contains a very high amount of fluoride. On the contrary, in those individuals who live in areas where the water sources do not contain sufficient fluoride, external topical products containing fluoride are often needed to supplement the intake of this mineral.

Various organizations have published recommended ranges for the optimal intake of fluoride by age group. For an adult, the usual intake of 3-4 mg/day is advised, with an upper limit of 10 mg/day. 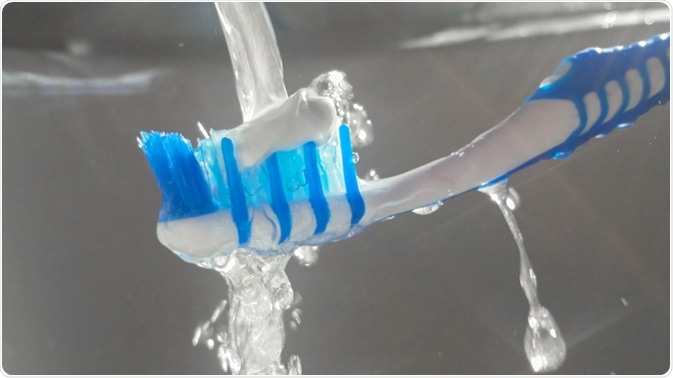 According to the American Dental Association, fluoride plays a vital role in the re-mineralization of tooth enamel. This helps in the prevention of dental caries and tooth decay caused by certain sugar-rich foods that enhance bacterial growth.

Because of the significance of fluoride in the development and protection of teeth, much research has been carried out on the optimal intake of fluoride during pregnancy and in the first few years after birth.

It is established that fluoride passes from the pregnant female to the fetus through the placenta, albeit the fetal concentration of fluoride remains much lower (25% less) than that in the mother. Many studies have been conducted to understand the possible benefits of prenatal intake of fluoride on the dental health of the child. A test group of children whose mothers received prenatal fluoride were compared to children who only received postnatal fluoride. The results were not consistent across the studies. Nevertheless, a general conclusion has been drawn by a majority of the researchers that the prenatal intake of fluoride was not of significant benefit in the prevention of dental caries in infants. This may partly be attributed to the low concentration transfer of fluoride to the fetus, and also to the fact that greater part of the tooth is formed newly after birth and cannot be benefited by the prenatal intake of fluoride.

Fluoride intake for the treatment of dental ailments in pregnant females during the second and third trimesters has been largely found to be safe for the fetus, though a few studies wherein high fluoride intake was recommended for therapeutic purposes during pregnancy showed that it resulted in mild fluorosis in the children.

Effects on the Brain

Scientists have also studied the impact of high fluoride levels on the fetal brain in various studies.

A pregnant female suffering from chronic fluorosis transfers a significant amount of fluoride to the fetus transplacentally. This increases the risk of fluoride poisoning. The accumulation of fluoride in the fetal brain has been shown to result in significant negative effects on the development of the neurons. Studies have revealed signs of neurological damage and imbalance in certain neurotransmitters in such children, especially a decreased level of norepinephrine. These changes may manifest as the inability of central neurons to maintain activation, and an overall slowing of intellectual growth.