Ferrofluids are colloidal suspensions of magnetic particles in a liquid carrier, which become magnetized in the presence of a magnetic field. These may be composed of iron, nickel, or cobalt, and show magnetic properties.

The particles are typically about 10 nm in diameter, and may be suspended in either oil or water. Ferrofluids are also called magnetic nanoparticles (MNPs) or magnetic beads (MBs). Ferrofluids were first introduced to the world in the 1960s by NASA Lewis Laboratories and AVCO Space Systems independently. 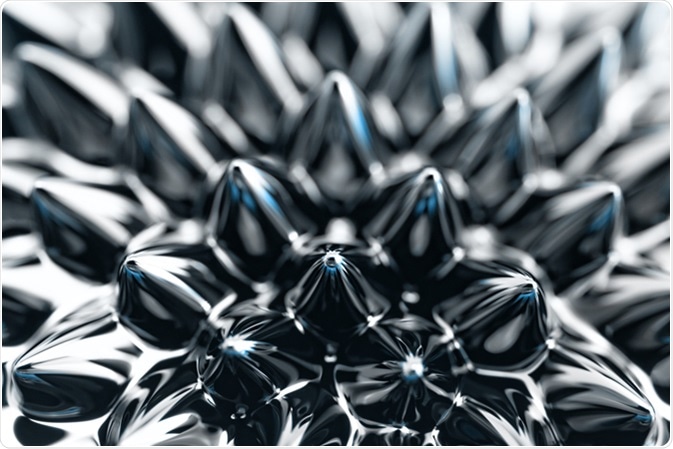 Nano-sized magnetic particles (e.g. iron oxide) can be synthesized in many ways. One such reaction is by co-precipitating magnetite (Fe3O4) with ammonia (NH3) from an iron solution:

Iron oxide may be directly cytotoxic due to the formation of oxygen and nitrogen free radicals. Therefore, MNPs are mostly prepared using core-shell methodology which has several advantages:

The magnetic core of an iron oxide nanoparticle comprises magnetite (Fe3O4) and/or maghemite (γ‑Fe2O3), whereas the coat is made up of organic compounds such as surfactants, synthetic/natural polymers, and inorganic materials like carbon, silica, oxides, or precious metals.

Cancer is a major killer all over the world. Over the past several decades, chemotherapy, radiotherapy, and surgery have been the main components of cancer management. Such treatments possess their own advantages and disadvantages.

Both chemotherapy and radiotherapy are nonselective in their effects, affecting healthy cells as well as cancerous ones, though radiotherapy has more localized effects. Moreover, this treatment is carried out at tissue/organ level, not at cellular level; thus, the chances of causing harm to healthy cells increase.

Treating cancer by surgical removal is another successful method, but it is impossible to carry out surgery in all cases, as some locations are inaccessible, such as the deep interior of the brain or the liver. Moreover, surgery is not an option in the presence of widespread tumor metastasis.

All such conventional treatments have limited access in one or other manner, and lack selectivity of action towards tumor cells. There is much need of a technique that targets the tumor cells specifically.

Using MNPs as drug carriers in targeted cancer therapy provides good opportunities for cancer cure, as the use of such carriers reduces the side effects pertaining to conventional treatments. Medications can be targeted to treat the desired locations inside the body with the help of the magnetic properties of ferrofluids.

MFH uses MNPs in combination with heat. It can treat tumors which lie deep within the body areas such as the bony skull (glioblastoma) and the pelvis (prostate/cervical carcinoma). The treatment involves administration of magnetic nanoparticles into the tumor followed by exposure to an alternating current (AC) magnetic field.

The cancer cells which adhere to MNPs are exposed to the alternating magnetic field (AMF), and the temperature is set above 42–46°C. Heat alters some receptor molecules on the cancer cell surface, which enhances their recognition by natural killer cells.

Superparamagnetic iron oxide nanoparticles (SPIONs) show great promise in biomedical applications as they are small enough to be used at cellular level, and display magnetic behavior only in the presence of a magnetic field.

In 2005, the first Phase 1 clinical study was conducted in patients with recurrent prostatic tumor which concluded that magnetic hyperthermia is a feasible as well as well-tolerated treatment modality.

Another study, two years later, was conducted using magnetic hyperthermia in combination with radiotherapy in 14 brain cancer patients, demonstrating that the therapy was well‑tolerated in all patients, though with minimal or no clinical benefit.

The treatment operates at cellular level rather than at the tissue or organ level, so it is able to target cancer cells selectively compared to the conventional approaches used in the treatment of tumors. In a recent study, it has been seen that a proteasome inhibitor used along with MFH can be used to treat larger tumors unlike other conventional methods.

MFH is projected to be a major breakthrough in cancer treatment, and promises to be a viable therapy for treating human tumors.

Other areas in which MNPs may prove to be useful include lung cancer which is notoriously difficult to treat because of the lack of adequate drug concentrations at the sites of disease. One in vitro study has used aerosols containing superparamagnetic nanoparticles of iron oxide delivered to the lung to reach effective dosage levels in the affected areas of the lung without adverse effects.

Another area which is exploring the feasibility of MNPs is gene therapy to introduce genes into targeted cells without having to use viral and retroviral vectors, which are especially noted to be associated with adverse effects.