A tremor is a vibratory involuntary muscular movement of one or more parts of the body. It may be so subtle as to be invisible, or intense enough to interfere with daily activities.

Tremors are known to occur for many reasons, but the most common cause is essential tremor. In a majority of affected individuals, the tremor occurs in the hands, but may also be found in the upper or lower extremities, the head, the chin, the vocal cords, or the trunk.

All people tremble under the stress of intense emotion, tiredness, or severe hunger. Other situations which induce physiological tremor include:

It is called a physiological tremor because it is a normal reaction to the offending situation or trigger, rather than being the result of damage to the neurological centers. It disappears when the underlying stimulus is removed.

This type of tremor is the most frequently seen, and is the result of damage to the areas of the brain that control voluntary muscle movement. The individual has no known underlying disease which could account for the trembling, though currently it is thought to be due to cerebellar damage in many cases. The hands are usually affected, and the tremor is brought on by the start of any manual action. Essential tremor worsens with age, and the individual may be unable to perform the normal activities of daily living if the tremor becomes too violent. Triggering factors may include strong stress or emotions, fatigue, or hypoglycemia. It is transmitted to 50 percent of offspring.

This disorder is one which affects the basal ganglia of the brain, the structures which regulate voluntary muscle movement. It leads to an imbalance between the levels of stimulatory and inhibitory neurotransmitters. It is usually seen as a “pill-rolling” movement of the hands, but may also appear in the chin, or the trunk, or the legs.

The onset of this tremor comes is after the age of 60 years. It starts on one side of the body but eventually occurs on both sides. Parkinsonian tremor is a rest tremor and may be seen with other diseases that affect the basal ganglia. Intense emotional or physical stress can exacerbate the tremor.

This condition is a complication of dystonia, a condition in which the muscle tone is abnormal. Such individuals have twisting or writhing movements of the body rather than straightforward tremors. Sometimes fixed positions occur, such as wry neck. Dystonic tremors are more irregular, and often disappear with complete rest, while gentle touch or pressure on the trembling part may significantly reduce the amplitude.

In some cases, the cerebellum of the brain is damaged leading to intention tremor, which appears when the person tries to execute a purposeful movement. The damage may be the result of a stroke, brain tumor, or neurodegenerative disease such as Multiple Sclerosis.

Chronic alcohol abuse, or medication abuse, can also result in this type of damage. Individuals with cerebellar tremor may also have associated problems with speech and gait, nystagmus or rapid involuntary side-to-side eye movements, and postural tremor. 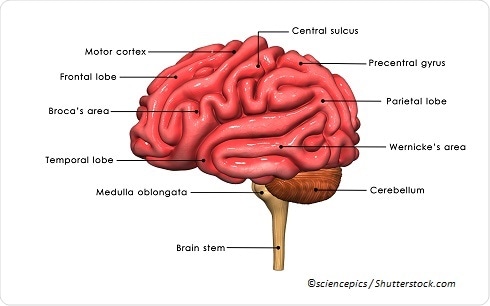 This type is also called functional tremor, and comes on suddenly, disappearing with equal rapidity. It is provoked by stress, and the form varies with each presentation. When the person’s attention is distracted, the tremor characteristically disappears or is dramatically reduced. It is often the result of a psychological disorder.

This type of tremor occurs at a very high frequency, so that it is felt by the person immediately upon standing. However, it cannot be seen and once the individual begins to walk or is lifted off the ground, or sits down, the tremor stops.

Damage to the nervous system

Some conditions may lead to damage of the peripheral nerves, such as injury, certain nutritional deficiencies, brain or spinal cord disease, or systemic illnesses. This may lead to tremor as well as sensory loss, gait disturbance, and postural imbalance.

An overactive thyroid or liver damage may produce a tremor. Similarly, alcohol abuse may lead to peripheral neuropathy and result in a tremor.