Visceral larva migrans is a zoonotic infestation by certain nematode parasites which are found in dogs and cats. These are roundworm larvae of the species Toxocara canis (T. canis) and (less frequently) Toxocara cati (T. cati). 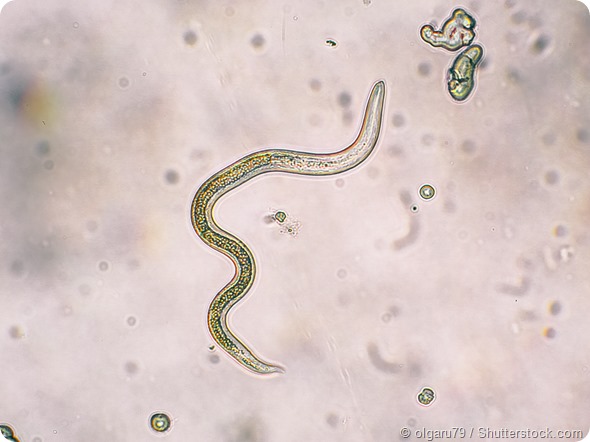 When roundworms infest these animals, they live and lay eggs in the intestines. The eggs are passed out with the feces, which contaminate the soil where the droppings are laid. They are non-infective and become infective after undergoing a couple of molts in the soil, over 2-4 weeks. At this stage they remain viable for years.

When this contaminated soil is ingested by humans, or the eggs in it come into contact with edibles, the eggs hatch in the human body. For instance, if fruits or vegetables are grown in this soil, they may have the eggs on them. Young children sometimes ingest soil when they have pica, or if they play in such places. Raw liver from these animals is also a route of larval transmission.

The incubation period in humans for visceral larva migrans is anywhere between 2 weeks to one year.

The larvae that emerge from the hatched eggs travel through the intestinal wall into the blood capillaries to reach different parts of the body, including the liver, lungs, eyes, brain or heart. In these organs, the worm larvae cause varying degrees of local inflammation leading to non-specific symptoms. This condition is referred to as visceral larva migrans. It was first described by Beaver and his coworkers in 1952.

Since dogs do not choose a specific spot to pass their stools in, visceral larva migrans involves T. canis larvae much more commonly than T. cati. Toxocara larvae cannot mature into adult worms in humans because they do not develop beyond the L2 stage of their life cycle outside their definitive hosts.

Symptoms of visceral larva migrans range from mild to life-threatening. They include:

Factors which determine how serious the symptoms are may include:

The diagnosis of this condition is by a history of potential exposure along with the symptoms of allergy or systemic complaints. The stool should be examined for roundworm eggs and larvae. Blood tests show a high white cell count. Specific toxocara antibodies are also high.

In rare situations, brain, lung and heart complications may result from larval infestation. These include encephalitis, arrhythmias and breathlessness.

Toxocariasis is usually self-limiting and does not require treatment, but if required, antihelminthic drugs are given.