Vitiligo is a chronic skin disorder which is caused by T-cell mediated autoimmune destruction of the pigment-producing cells or melanocytes in the skin. Heat shock protein plays a central role in producing this wipeout of melanocytes in affected areas of the skin. 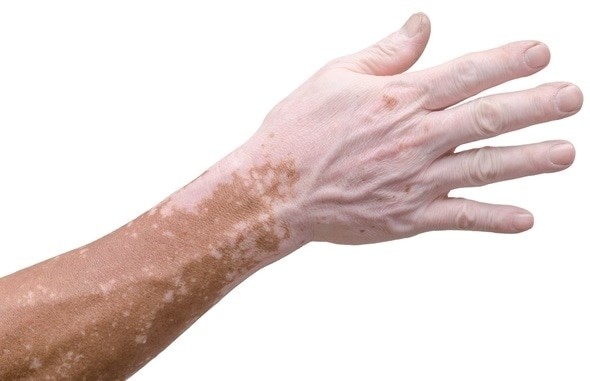 As a result, white patches appear on the skin, mucous membranes and the retina. These patches may sometimes be preceded by itching. The hair that grows on these patches also turns white sometimes. It affects about 0.5 to 1% of the world’s population, and often starts in the mid-twenties. Both sexes and all races show approximately equal incidence of this condition.

It may be more common in people who suffer from autoimmune diseases such as:

However, the vast majority of affected people do not have any other autoimmune disorder.

The earliest sign of vitiligo is the appearance of the classic depigmented white patches, usually on the parts of the body that are exposed to the sun. Thus the hands and arms, the feet, the face and lips are the first sites to be affected. Later other areas are also affected.

Vitiligo is diagnosed by a careful medical history, physical examination and laboratory tests.

The history is meant to elicit any factors which preceded or precipitated the depigmentation, such as sunburn, stress or other autoimmune disease. The examination documents the extent of the vitiligo.

Tests such as a skin biopsy will confirm the diagnosis by showing a complete absence of melanin production in the affected skin. Blood tests for pernicious anemia and thyroid function may be required to rule out these autoimmune conditions.

Treatment is based on alleviating the contrast between the pigmented and non-pigmented skin. There are medical, surgical and adjunctive therapies reduce the cosmetic blemish. Medical treatments include light therapy, photochemotherapy and topical creams containing corticosteroids or calcineurine inhibitors.

Surgical options are usually suitable for small patches rather than more widespread vitiligo. Skin grafting and tattooing represent some surgical treatments, while self-tanning creams may help hide the depigmented area. Support from a trained counselor or from support groups is important in successfully adjusting to the condition.