The localized loss of sensation with resultant reduction in pain stimuli is the end result of local anesthesia. This mode of anesthesia is considered to be safer than general anesthesia, because it bypasses the systemic (i.e. body-wide) effects seen with general anesthesia, such as a loss of consciousness and hemodynamic alterations.

Local anesthesia, as a mechanism of action, inhibits the nerves in question from passing their signals to the central nervous system. While patients do not feel pain in the area during a surgical procedure, they may still have the sensation of movement or some pressure. 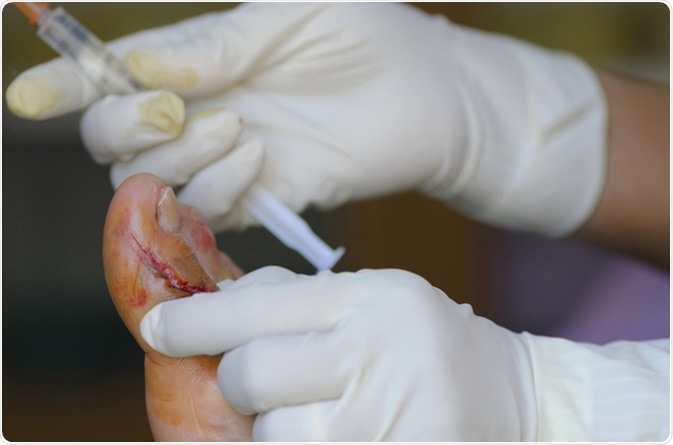 Local anesthetics are classified into two main groups based on the chemical structure of the intermediate chain: one being an amide group and the other being an ester group. This type of classification based on a difference in structure is clinically useful, because it helps to predict the potential allergic response, as well as the pathway by which the anesthetic is expected to be metabolized.

Lipid solubility not only determines the potency of the local anesthetic, but it also establishes the speed of onset. While greater lipid solubility should theoretically mean a quicker onset of anesthesia due to quicker diffusion, it appears that several other factors play a role. This is because in vitro studies may have different results from those obtained by clinical research, largely due to the interference of many biological factors which are at work in a living environment. Thus in actual clinical scenarios, greater lipid solubility retards the onset of local anesthesia. Notwithstanding this observation, the total number of lipid-soluble molecules in the local anesthetic is a crucial determinant of anesthetic onset, and it should be greater than the number of their water-soluble counterparts,.

It is important to note that some pain is usually felt when the local anesthetic is being injected. Patients may experience this pain as a result of the technique used while injecting the agent. Sensitive patients may also develop an allergic reaction to the local anesthetic. Additionally, a hematoma may form in some cases. There is also the risk for infection and nerve laceration at the site, but these are fortunately rare occurrences.

If local anesthetics are inadvertently injected into a blood vessel or given in excessive doses, systemic toxicity may occur. These effects are manifested as central nervous system and cardiovascular derangements, such as reports of ringing in the ears, nausea, vomiting, metallic taste in the mouth, respiratory depression, hallucinations and seizures.