Vitamin B12, or cobalamin, is an essential micronutrient required in DNA synthesis and red blood cell maturation, among other metabolic functions.

Its deficiency leads to a spectrum of disease. It is important to trace its absorption in order to understand how a person can become deficient.

Vitamin B12 is normally bound to food, but when it reaches the stomach, the acidic milieu encourages its breakdown. 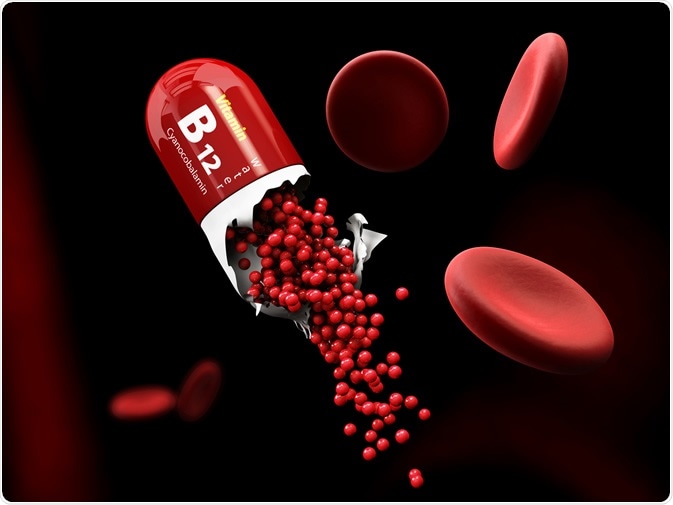 It is then complexed with intrinsic factor (IF), another molecule that is produced by gastric parietal cells, in the duodenum, which is the first part of the small intestine. In this form, it is absorbed in the terminal ileum.

Post-absorption, the vitamin is taken up by a protein called transcobalamin II, which carries it to all parts of the body.

However, an IF-independent system of absorption also exists. This is responsible for only 1 percent of absorption, but this seemingly small fraction plays a major role in oral replacement of the deficient vitamin.

When sufficiently large doses are administered orally, in other words, sufficient absorption occurs to compensate for the deficiency.

Cobalamin deficiency may result from missteps at any point in this pathway.

The etiological factors leading to a deficiency of vitamin B12 may be due to deficit of the vitamin in the diet, impaired absorption of the vitamin because of malabsorption syndromes, and various miscellaneous gastrointestinal pathologies.

Vitamin B12 in the diet comes chiefly from meat and dairy products. Thus when the diet includes these, several times the recommended daily allowance (RDA) of 2 mcg is obtained.

This means that many people have a large reserve of the vitamin, sufficient to tide over several years of deficient diet. However, alcoholics, vegans, and people who eat poorly or have a very restricted diet, may be at higher risk of cobalamin deficiency.

Since ancient times it has been known that pernicious anemia causes impaired red cell production. In this condition, the parietal cells of the stomach are damaged or destroyed by an autoimmune disease, reducing the amount of IF produced and, in turn, the formation of the vitamin B12-IF complex.

Laboratory tests show parietal cell antibodies, which carry up to 85-90 percent sensitivity for pernicious anemia, but these are not specific for this diagnosis.

Conversely, IF antibodies are much more specific but detect only half the cases of pernicious anemia.

The Schilling test was once popular to diagnose this condition, but has now fallen out of favor. This is because it detects IF-associated malabsorption, which was thought to indicate the need for parenteral supplementation of the vitamin. However, recent evidence shows that the oral route is just as effective in raising the level of vitamin B12 as intramuscular administration.

This research, along with the added cost and skilled manpower required for the test, has ensured that it is no longer relevant.

Another form of malabsorption occurs when there is impaired absorption of vitamin B12 bound to food proteins. This is due to failure of cleavage of the bond between the food and the vitamin. This is more common when there is hypochlorhydria for a currently unknown reason.

Atrophic gastritis is a major underlying cause of vitamin B12 deficiency, as is the prolonged use of proton pump inhibitors such as omeprazole, and H2-receptor blockers.

One organism that is associated with vitamin B12 deficiency is Helicobacter pylori, found in over half of all patients. Adequate treatment of this infection has been shown to result in an increase in the concentration of the vitamin.

Individuals with chronic gastrointestinal conditions such as indigestion or peptic ulcers which recur frequently may have other underlying causes such as a gastrinoma leading to Zollinger-Ellison syndrome, Crohn’s disease, or rare deficiencies of transcobalamin.

Some types of intestinal malformations, whether congenital or acquired, as following surgery on the bowel, may also result in bacterial overgrowth which leads to competition by the micro-organisms for vitamin B12 in food.

Vegetarianism may also cause vitamin B12 deficiency because this compound is found mostly in animal products i.e. meat products and milk.

Pregnancy and lactation are high-risk periods for the development of cobalamin deficiency because of the increased requirement for it, as are patients with autoimmune disease and HIV infection.

Renal disease also puts one at risk of this deficiency. In this latter case, it is probably due to interference with the entry of the cobalamin-transporter complex into the cells, with normal or raised plasma levels of the vitamin and of transcobalamin, but an intracellular deficiency of B12. Fortunately, it is easily treated with B12 supplementation.